Stamford Bridge boss looks to use Spaniard to help persuade La Liga side to part with Colombian striker.

Follow all the comings and goings on January Transfer Deadline Day 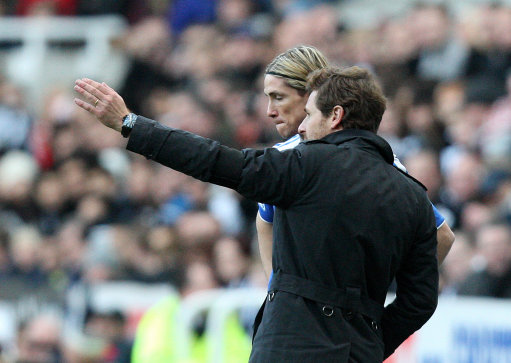 Andre Villas-Boas is ready to offer faltering striker Fernando Torres a chance to return to his former club Atletico Madrid as he looks to lure his former FC Porto striker Radamel Falcao from the Vicente Calderon to Stamford Bridge.

27 year old Spanish international Torres has had a woeful year at Chelsea and he has struggled to get anywhere near justifying the £50m paid to Liverpool for his services and with the Euro 2012 finals around the corner and national team boss Vicente Del Bosque demanding regular first team action in order to secure a spot in his squad, a move back to Spain could be of interest to the former Atletico Madrid hero.

Torres netted 91 goals in his seven seasons in the Los Rojiblancos first team before he made his move to Liverpool in the summer of 2007.

Villas-Boas owes a great deal to Radamel Falcao, the former River Plate man netted an incredible 38 goals in 42 matches during his treble winning season at FC Porto. The Colombian forward’s goals were crucial to the Portuguese sides unbeaten domestic season which led to a league and cup double and perhaps his most impressive displays were saved for the club’s Europa League run, where the 25 year old scored 18 goals in 16 matches as they clinched the trophy.

That run of form earned Falcao a move to La Liga where he has continued to impress and score with regularity. Thus far this season the Atletico Madrid man has scored 14 goals in 16 matches but has seen his side get no nearer to breaking the dominant hold Barcelona and Real Madrid hold over the rest of the Spanish top tier.

Indeed Atletico Madrid find themselves down in tenth place, some way off the pace and therefore Falcao would surely be tempted by the chance to reunite with Villas-Boas at Chelsea.

For their part Atletico may be tempted by the return of Fernando Torres and a straight swap may suit all parties. The La Liga side spent £36m to sign Falcao last summer and an exchange offer on deadline day is a deal that Villas-Boas is keen to strike.

Free goal alerts on your iPhone or iPod