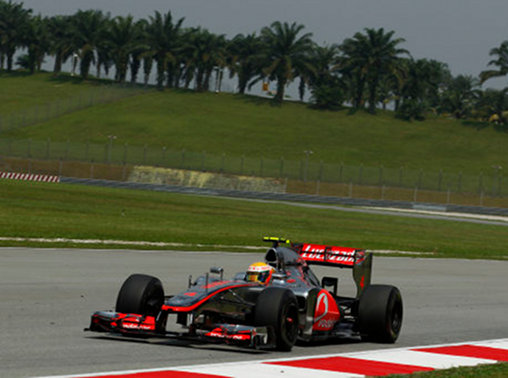 Britain’s Lewis Hamilton hogged the limelight Friday by topping both practice sessions as he bids to ignite his championship charge with victory at the Malaysian Grand Prix.

Hamilton said he would push for his second pole position this year in qualifying on Saturday despite a couple of blips when he ran off-course.

“Around here, overtaking will be a little more possible than in Melbourne. Nevertheless, starting from the front will still be the best position for the race, and that’s what I’ll be going for tomorrow,” Hamilton said.

“We’ve got to keep pushing, stay hydrated and remain focused — there’s a lot of hard work ahead.”

Red Bull’s Sebastian Vettel, who swept to his second straight world title last year, had a quiet afternoon and wound up 10th, 1.23sec off Hamilton’s pace.

“There is still a lot to do,” Vettel said. “The tyres drop off (wear) quite quickly here, which is the same for all the drivers, but I think we are sliding quite a bit and I would like the car to be a bit more stable.

“We made a good step today, the potential is there, but we need to get to it. We will see what we can do tomorrow.”

Hamilton qualified quickest at last week’s season-opener in Australia but he eventually had to settle for third behind Button and Vettel, frustrating his bid to seize early control of the title race.

On a typically hot, overcast afternoon with temperatures of 31 degrees Celsius (88 Fahrenheit), Hamilton was quickly at the top of the field with a time of 1:38.921 inside the first 20 minutes.

Ricciardo turned heads as he bettered Hamilton’s time by seven hundredths of a second, while Webber and Caterham’s Heikki Kovalainen narrowly avoided touching wheels as they duelled on a tight right-hander.

Hamilton ran wide on his ninth lap but he came storming back to go fastest and he then lowered the time again to 1:38.617, despite locking a front wheel late in the lap.

Schumacher briefly headed the field around the hour-mark before Hamilton cut his mark by two-hundredths and then lopped it again to 1:38.172, a time that endured the last 20 minutes of the second practice.

Force India’s Paul di Resta finished 13th after a braking problem forced him wide early in the session, and then a sideways slide which left him bumping across a wide expanse of grass beside the track.

And there was more woe for HRT’s Narain Karthikeyan, who was too slow in qualifying to even start last week’s Australian Grand Prix, when he span late in the session and lay second last.

Despite concerns from rival teams, officials have raised no objections to Mercedes’ rear wing, which channels air-flow to cut resistance on the nose when the Drag Reduction System (DRS) overtaking aid is engaged.