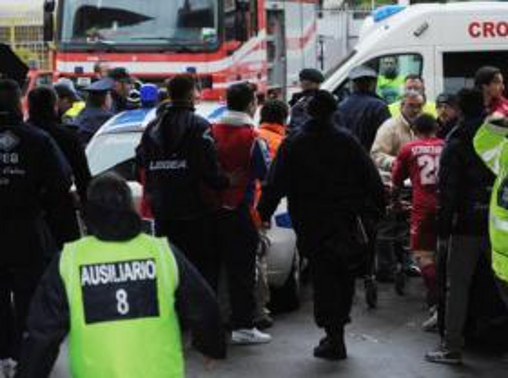 Tragic death leads to postponement of all Serie A and Serie B matches as mark of respect.

Italy Under 21 and Livorno midfielder Piermario Morosini has died in hospital after suffering a cardiac arrest during his team’s Serie B match at Pescara.

The 25-year-old collapsed in the 31st minute and received treatment on the pitch – reportedly including a heart massage in a bid to resuscitate him – before being rushed to hospital.

The match was abandoned and the players left the field in tears.

Lega Serie B then confirmed on their website: ‘Tragedy on the field. After suffering a cardiac arrest during the match between Pescara and Livorno, Piermario Morosini has died.

‘The 25-year-old player, who came through the youth ranks with Atalanta, arrived at Livorno from Udinese in January and played nine times for the Amaranto.

Speaking in the aftermath of the match, escara’s general manager, Danilo Iannascoli, said: ‘He looked at me in the eyes when he was taken into the ambulance. We are living through a drama.’

Italian media said a car belonging to traffic police blocked the ambulance’s way into the stadium and a window had to be broken so the car could be moved.

‘I don’t know if the ambulance was late, but I know that the entrance onto the pitch was blocked by a vehicle,’ Iannascoli said. ‘Morosini collapsed, he tried to get back up but then collapsed again.’

This tragedy is of course all the more poignant given the recent cardiac arrest suffered by Fabrice Muamba at White Hart Lane, which the Bolton man appears to have made a full recovery from, and our deepest sympathies are of course with the player’s family and friends.

As a mark of respect all matches in Serie A and Serie B have been postponed this weekend.