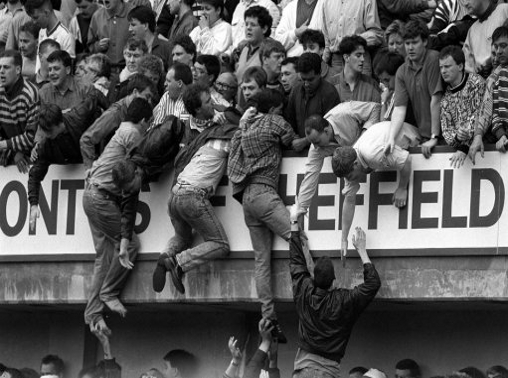 It’s a date of my life that up until very recently I had seemingly subconsciously shoved to the very back of my mind but in recent weeks I have come to recall the events fairly vividly.

I was 13 years of age and had been fully infected with the football bug. I had begun to travel to away games, gotten to enjoy the camaraderie, begun to really understand what it feels like to truly love a football club in a way that is probably doomed to end in more tears of sadness than joy.

My team had won, promotion was still very much a possibility.

Even though it was 23 years ago I can remember the sensation I felt when leaving the game I was attending and the air of unease that hung in the air.

I remember the stilted conversations that were abound.

The whispers. The discussions.

Someone with a radio giving updates to those assembled waiting for a train after the match and the sheer shock that descended upon us all when the gravity of the situation became apparent.

The sensation I felt, and can still tangibly feel today, was one of sheer shock. A hollow feeling like I had never felt before.

I remember then the weeks fighting with my mother about her insistence that I not go to football matches in the wake of such unspeakable loss. Surely a reaction that many a young child or adolescent was faced with when their parents understandably wanted to keep their loved ones safe.

Whilst I fought to be able to continue supporting my team in my heart of hearts I didn’t want to visit a football stadium. The feelings of unease whilst hearing the discussions and the details of the Hillsborough tragedy was one thing but on returning home from the game I was attending to then witness on television the footage of what occurred during the FA Cup Semi-Final scared me to my bones.

I may have fought to persuade my mother to allow me to attend the final games of that season but inside I was doing so only to attempt to prove to my bigger brother just how big a fan of the club I was. Inside the idea of returning to football made my stomach turn.

It’s not important to state my allegiance, or which club I supported then just as wholeheartedly as I did now.

There are still some who benignly debate the need for Liverpool fans to move on and to those I state simply with no malice or anger but in the hope of shaking some sense into their unfeeling beings.

It so easily could have been you.

I think about all the memories of the 23 years that have passed in my life since that day, the good times, the bad times and all points between.

I think to those who never got to experience life from April 15th 1989 onwards. The families and friends of loved ones who could never have imagined such a tragedy could befall them.

One can only imagine the feeling of grief that has been suffered by those Liverpool fans but to then add to that sum the helplessness and anger that comes from that fact that they still fight for justice 23 years on is frankly inhumane in the extreme.

Anyone who attempts to downplay, ignore or even denigrate those who lost their lives on that day really needs to take a long hard look in the mirror and wonder what sort of human being they are.

Perhaps most inexplicable are those who try to draw some sort of equivalence with other tragedies, as though the loss of life was somehow transferable, as if grief is a calculable commodity.

I do not support Liverpool but I wholeheartedly support those who still seek justice.

Their dignified attempt to get to the bottom of the events of that day deserves nothing but the utmost respect for all members of the football family, regardless of allegiance.