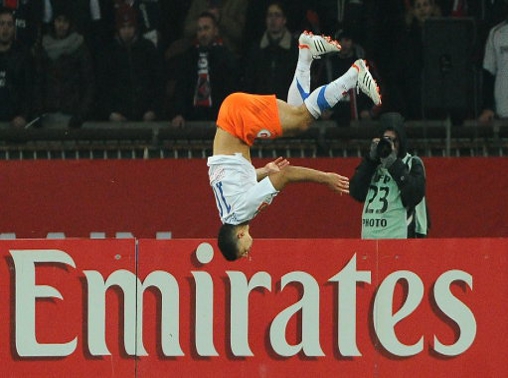 Inter Milan are ready to battle Arsenal for two of their summer targets Yann M’Vila and Younes Belhanda.

Arsene Wenger is expected to spend money in the summer as he attempts to re-establish his side as genuine title challengers next season.

And it has been reported that the Arsenal manager will make reinforcing his midfield his priority, with M’Vila of Rennes and Montpellier’s Belhanda identified as potential signings.

But it appears as though Wenger will face stiff competition from Inter for both players. The Italian giants are yet to make contact with either Rennes of Montpellier, according to Corriere dello Sport, but are preparing to launch bids once their Serie A campaign comes to end.

One wonders if the midfield is the area in Arsene Wenger’s squad that is in most need of repair but this source believes that the Gunners boss will look to beat off interest from Italian giants Inter Milan as they pursue a talented pair of Ligue 1 based midfielders.

Rennes youngster Yann M’Vila has long been linked with a move to the Emirates Stadium but noises from the French side’s chairman seem to indicate that the French international will be on his way this summer and he could be seen as a player Wenger looks to bring in to add more steel to his first team. But is such a move necessary?

Alex Song is the club’s main defensive midfield option but the Cameroon international has become a more complete player this term, becoming an excellent provider of forward balls and assists as well as the odd crunching tackle. Perhaps Wenger wants to use the player in that role from now on? Also the North London club also has young Emmanuel Frimpong to call upon as back up in this regard.

Younes Belhanda is an attack minded midfielder who can play in a number of areas but works most effectively out wide and again one wonders if such a player is needed. Arsenal have the likes of Theo Walcott, Alex Oxlade-Chamberlain and Gervinho to play in wide-roles and the the option to bring loaned out pair Ryo Miyaichi and Andrei Arshavin back into the first team picture.

That said Belhanda has had a great season at Montpellier and wouldn’t cost a great deal.

Inter Milan are in something of a freefall at present so may struggle to beat other member’s of the European elite in the transfer market this summer, especially if they fail to secure a Champions League spot for next term, which seems very likely.