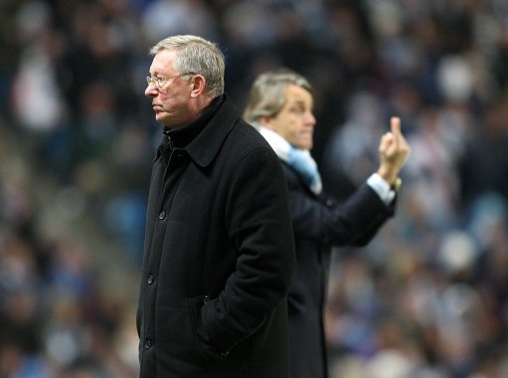 Manchester City striker Mario Balotelli has completed a three-game ban, but is unlikely to start given the form of Sergio Aguero and Carlos Tevez.

Defender Micah Richards is available after missing the win at Wolves because of a knee problem.

Manchester United have reported no new injury concerns, so long-term absentees Nemanja Vidic, Darren Fletcher and Anderson are the only players missing.

Manchester City scored six goals from just seven shots on target against United in their 6-1 victory at Old Trafford earlier this season.

There have been six red cards in Premier League Manchester derbies, five of them going to United.

Manchester United have lost only one of their last five Premier League trips to the Etihad Stadium & they also defeated Man City there earlier this season in the FA Cup (3-2).

No team in Premier League history has won a return leg after having lost by five goals or more at home in the reverse fixture.

Carlos Tévez has scored or assisted a Man City goal every 55 minutes this season in the PL, only Thierry Henry can boast a better ratio.

Sergio Aguero and Carlos Tevez have been on the pitch together for 304 minutes this season in the Premier League. In that time, Aguero has scored seven goals and Tevez has netted four.

Manchester City have won 77 of a possible 81 points in their last 27 Premier League home games.