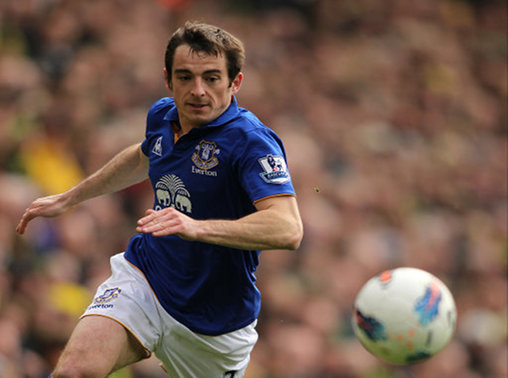 Manchester United will step up their efforts to sign Leighton Baines with a £10million offer.

Sir Alex Ferguson has been given the go-ahead from United owners the Glazers to proceed with a move for the Everton and England left-back.

Ferguson sees Baines as the ideal successor to Patrice Evra, who turns 31 next Monday and has looked unconvincing this season.

United had hoped to land their man for as little as £6m, given Everton’s precarious financial position.

But with Baines under contract for three more years and interest in him from other clubs, they will have to do better than that.

Whilst it’s true that Patrice Evra has not looked as effective as he has in his pomp the French international is still one of the best in the business and any move to bring in a replacement will clearly not go down all that well with the 30 year old.

Leighton Baines has been one of the most consistent full-backs in the Premier League for the past couple of seasons and is likely to be part of Roy Hodgson’s Euro 2012 squad.

David Moyes will hope to avoid losing any of his top talents this summer but the cold hard financial reality could mean he has to consider offers for one or two of his Toffees stars and the likes of Baines, Marouane Fellaini, Jack Rodwell and Ross Barkley will be high up on many sides wish-lists this summer.