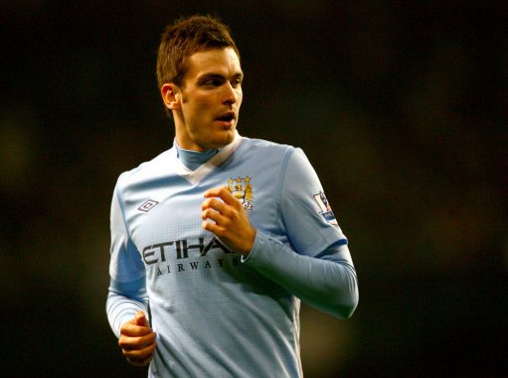 Little-used winger got nowhere near Roy Hodgson’s Euros squad, and hometown club Sunderland could now grab him for around £10m

Adam Johnson is considering his Manchester City future after missing out on England’s Euro 2012 squad.

The 24-year-old winger is disappointed he did not even come close to making Roy Hodgson’s 23-man party, and feels he may need to move to get regular Premier League action.

Sunderland are understood to be monitoring Johnson’s situation and would be interested in bringing him back to his native Wearside.

Mancini, who has previously warned Johnson against putting his off-field lifestyle before his responsibilities as a player, would listen to offers of around £10million.

Having spent pretty much all of his two and a half years at the Etihad Stadium out of Roberto Mancini’s starting eleven it would appear that Adam Johnson has to make a difficult decision. The 24 year old has to decide if he feels he has any chance of persuading his Man City boss that he is worthy of a first team berth or he must move on.

Though such a move would mean a significant drop in wages if the winger has any ambition to further his career it’s a decision he will have to make sooner rather than later.

A move to his hometown club will seem far more amenable now that Martin O’Neill has exorcised the ghost of Steve Bruce but even though the Black Cats will be pushing for a top six spot next term the former Middlesbrough man may feel that other, bigger, Premier League club’s could be willing to make a move for his services.