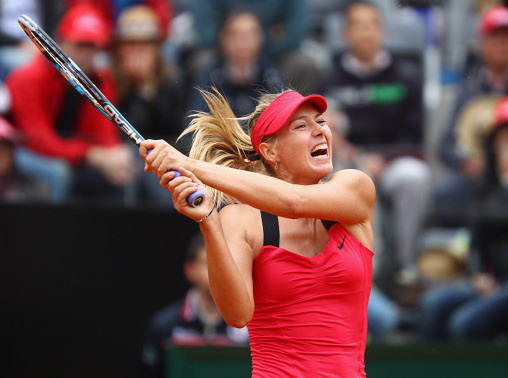 Sharapova, who needs a Roland Garros title to complete a career Grand Slam, saw her meteoric rise halted by shoulder surgery which sidelined her for almost a year until mid-2009.

Her 2004 Wimbledon triumph, 2006 US Open victory and 2008 title at the Australian Open all came before her shoulder surgery.

“I think I’m just much more grateful today for what I’m doing and what I have, more than anything,” said Sharapova, who for the first time faces Kanepi for a place in the last four.

“In the past I would always have to save myself, because knowing that it’s seven matches. I never felt like I recovered that well. But I think with experience and just being physically stronger, I’m much better at that.”

Sharapova, who came into Paris with claycourt titles in Stuttgart and Rome, cruised through her first three rounds for the loss of just five games.

But she struggled over three sets to beat experienced Czech Klara Zakopalova in a chilly, windswept fourth round on Monday, finishing with 53 unforced errors and 12 double faults, including one on match point.