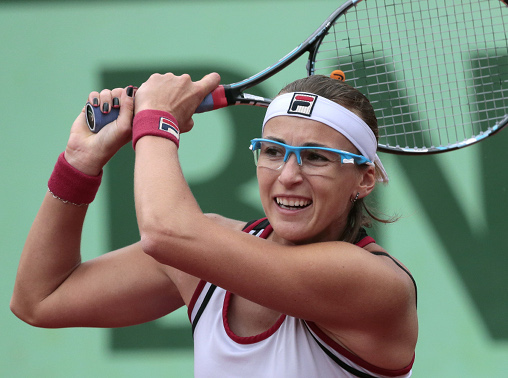 Kazakh qualifier Yaroslava Shvedova, who knocked China’s defending champion Li Na out of the French Open on Monday, has become an instant celebrity among Chinese tennis fans after her shock victory.

The world number 142 was told at a post-match interview that she had become “very famous” on the Internet in China and some fans wondered whether the 24-year-old was short-sighted or just liked wearing stylish sports spectacles.

Shvedova revealed that she only wore sunglasses before but discovered she had a nervous tic in one eye when she played Fed Cup matches in China in February.

“I went to see the doctor, and I had some issues and they checked my vision. They said like I had some problem with the vision and maybe that’s why it was giving me some problem in the night sessions,” she said.

As a result, a sports eyewear specialist company made her some prescription glasses to aid her vision at any time of day, such as the daytime fourth-round match when she dumped Li 3-6, 6-2, 6-0.

The question was not as farfetched as it may seem — myopia or near-sightedness is a widespread problem among young ethnic Chinese not only in the mainland but in overseas communities.

Shvedova, who was a quarter-finalist in 2010, had to come through qualifying after a knee injury in 2011 saw her ranking plummet to 206, but has come back strongly.

“I was nervous in the first set and was making mistakes, but I then tried to attack more,” said Shvedova.

“I knew she was the defending champion and she had all the pressure. I had come from qualifying, was playing my seventh match and I just told myself to enjoy the day and try and my best.”