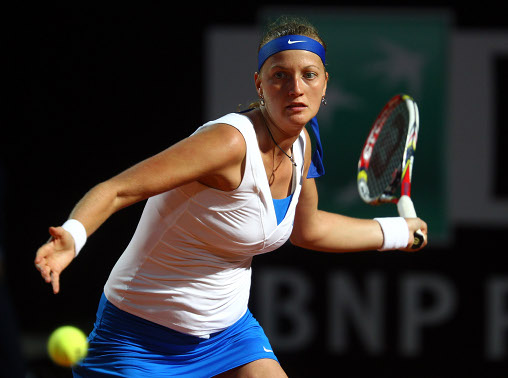 Wimbledon champion Petra Kvitova of the Czech Republic reached the French Open semi-finals on Wednesday with a hard-earned 3-6, 6-2, 6-4 win over qualifier Yaroslava Shvedova of Kazakhstan.

The world number four will play second seed Maria Sharapova of Russia, whom she defeated in the Wimbledon final last year.

“Every point that we played was really tough,” Kvitova said after beating Shvedova, who was ahead 4-2 in the third set when the Czech turned the match around. “I knew that I had to change my game.”

“It wasn’t easy and I’m really happy that my serve helped me and I played my aggressive game again,” added the left-handed Czech, who sent down five aces in the match.

Shvedova, 24, had knocked out defending champion Li Na of China in the fourth round and would have been the first qualifier to make it to the women’s semi-finals at Roland Garros.

By beating Li, Shvedova said she earned enough points to qualify for the singles competition at the London Olympics.

“It was a very good tournament. I’m very happy,” said the Russian-born player who converted to Kazakh citizenship in 2008.

Kvitova, 22, had a slow start, got broken in the second game and failed to convert three break points in the next, giving the Kazakh a quick 3-0 lead.

The Czech held to 3-1 and took more chances in the fifth game to break Shvedova to 2-3 and put the match back on serve.

But Kvitova was broken again when a backhand return clipped the net and went wide, and in the next game hit a forehand long to give the Kazakh a 5-2 lead.

Shvedova came out firing in the opening game of the second set, breaking Kvitova with a cross-court backhand return.

Kvitova evened the score to 1-1 and held serve to nose ahead for the first time in the match before breaking Shvedova to consolidate her lead at 3-1.

Kvitova sprinted to 5-2 and then broke Shedova one more time to set up the deciding set.

The Wimbledon champion opened that with an easy hold and proceeded to break Shvedova to 2-0, but threw away the third game with two double faults and two unforced errors, enabling Shvedova to equalise at 2-2.

In the fifth game, as it began to drizzle on Suzanne Lenglen court, Kvitova missed an easy forehand return to give Shvedova two break points, and then hit a forehand long to give the qualifier a 3-2 lead.

Undaunted, Kvitova held in the seventh game and immediately put pressure on Shvedova’s serve to level the match at 4-4, followed by a crucial hold.

Serving at 4-5, nerves got the better of Shvedova, allowing the world number four to convert her second match point for a place in the semi-final with Sharapova.