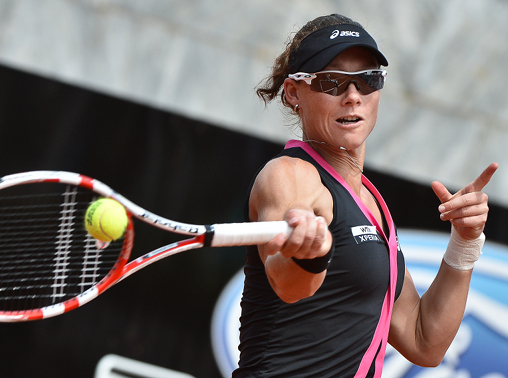 Sam Stosur is wary of another dangerous Italian player in Sara Errani, having lost the 2010 final to Francesca Schiavone.

Australia’s Samantha Stosur is expecting a heavyweight French Open semi-final challenge from pint-sized Italian Sara Errani and won’t be fooled by the slight figure on the other side of the net.

Sixth-seeded Stosur, the US Open champion and runner-up in Paris in 2010, starts Thursday’s semi-final against 21st seed Errani as overwhelming favourite, holding a 5-0 career lead over the Italian.

But Errani has punched above her weight at Roland Garros, reaching a maiden Grand Slam semi-final, knocking out former champions Ana Ivanovic and Svetlana Kuznetsova along the way.

Stosur, at 1.72m and 65kg, goes into the match with an eight-centimetre height advantage and packing the muscular power of an extra five kilos.

“I guess when your opponent is a little bit shorter, it’s a little bit easier for me to try and use the serve and forehand up high,” said the Australian.

“When you are that height, they are used to hitting the balls up there too. So it can help, but they are also going to be used to it. You have to have a plan B in the back of your head.”

Schiavone was the more aggressive player two years ago but Stosur said she learned a “tough lesson” from that match and will come out firing when she faces Errani, whom she beat on clay in Rome in straight sets last month.

“I’m going to play aggressive and try and play my game,” said the 28-year-old from Queensland.

“I think the one thing I learned with the match against Schiavone in the final is that she played more aggressive and really stepped up and did more that day,” Stosur recalled.

On the challenge of facing Errani, the Australian added: “I’ve had success against her in the past, but, you know, semi-final of Roland Garros is a whole new ball game.”

“I think this is probably the breakthrough year for her, making quarter-finals Australian Open, and now here, French Open. You know, she’s having a good year. You’ve got to respect that and be aware of that.”

When Stosur beat Serena Williams to win last year’s US Open, she became the first Australian woman to win a Grand Slam singles title since Evonne Goolagong Cawley at Wimbledon in 1980.

The last Australian woman to win at Roland Garros was Margaret Court in 1973.

Errani, meanwhile, believes her impressive form in Paris as well as during the claycourt season, where she collected three titles, will work in her favour on Thursday.

“Stosur is an amazing player, she’s very strong. But I am here because I am playing well,” she said.