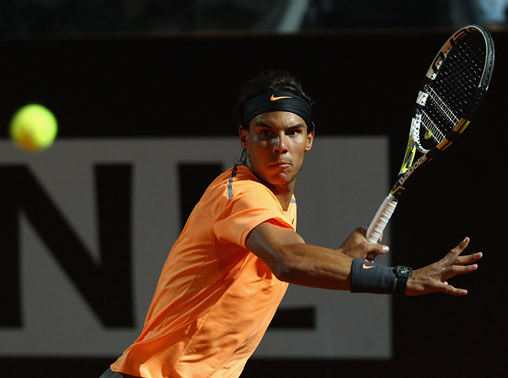 Will the Paris rain allow either Rafa Nadal or Novak Djokovic to triumph in the second Grand Slam of the season?

Embattled French Open organisers were braced for more heavy rain to swamp the suspended men’s final between Novak Djokovic and Rafael Nadal on Monday as they played down accusations of a scheduling blunder.

Nadal, chasing a record seventh Roland Garros title, was leading 6-4, 6-3, 2-6, 1-2 when play was halted for a second and final time at 6:50 pm (1650GMT) on Sunday with conditions on Philippe Chatrier Court deemed too treacherous.

The final, in progress for three hours, resumes Monday at 1:00 pm (1100GMT) with Djokovic, bidding to become only the third man to hold all four majors at once, in the ascendancy and serving for a 3-1 lead in the fourth set.

But further rain is forecast for large parts of Monday with a similarly wet Tuesday also expected.

Having faced claims that Sunday’s showpiece should have started earlier than 3:00 pm (1300GMT), tournament director Gilbert Ysern insisted that there should be enough breaks in the weather on Monday to allow the final to finish.

“The weather tomorrow (Monday) is not excellent, but it is okay through 5:00 or 6:00 pm with a risk of some showers during the day,” he said.

“The guys in charge of the forecast are pretty optimistic. So we think that 1:00 is probably a safe starting time.”

The last time a French Open men’s final failed to be completed on the last Sunday was 1973 when it was played on the Tuesday with Ilie Nastase beating Niki Pilic.

Organisers came under fire for starting the final at 3:00 pm on Sunday, instead of an earlier slot, despite the dire weather predictions.

“TV does not dictate the schedule. Of course, their expectations are important factors, but they do not dictate,” said Ysern.

“Not everyone knew for sure what time it was going to rain, it’s not that precise. Arrangements for the final starting time are made months in advance and, out of respect for the broadcasters, we cannot change at the last minute.”

Yserns said he had been confident that the match could have been finished on time.

“We can play here until 9.30 at night, that allows six and a half hours to play so starting at 3pm is not too late. It’s not decided yet that we’re going to stick to 3:00 pm, but I don’t think at this stage we should start earlier.”

World number one Djokovic had looked down and out at one stage on Sunday.

After slipping two sets down, he was also a break behind at 0-2 in the third before he reeled off eight games in succession to take the third set — the first lost by Nadal in this year’s event — and lead 2-0 in the fourth.

The first game of the fourth set had featured a gruelling 44-shot rally.

Spanish world number two Nadal, seeking an 11th major, went into the match with a staggering record of 51 wins against just one loss at Roland Garros.

Five-time major winner Djokovic, the Wimbledon, US Open and Australian Open champion, is looking to emulate Don Budge (1938) and Rod Laver (1962 and 1969) by holding all the Grand Slams at once.

In a record fourth successive Grand Slam final between the two, and following their almost six-hour epic in Australia, Nadal swept into a two-set lead with Djokovic undone by 30 unforced errors.

The Serb also earned a warning for smashing his racquet into his courtside chair box which left a gaping hole in the front.

But Djokovic, who had been two sets to love down to Andreas Seppi in the fourth round, and saved four match points in his quarter-final victory over Jo-Wilfried Tsonga, refused to buckle.

Monday finishes have become common at the US Open in New York with the last four finals taking place on the extra day while the 2001 Wimbledon final was also completed on a Monday.

Roland Garros will eventually avoid late finishes as a main court with a retractable roof is to be built in 2017.