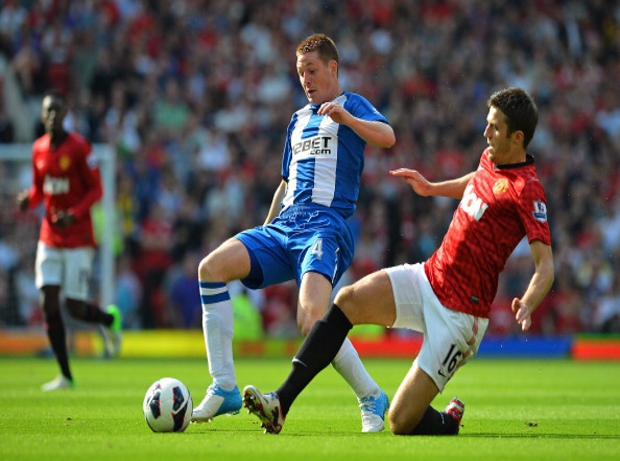 Ferguson is believed to be a big fan of the box-to-box midfielder.

McCarthy has also been linked with a £10 million move to Chelsea, though Ferguson’s friendship with Latics chairman Dave Whelan could swing any deal in his favour.

Check In to Liverpool Vs Man United

Ferguson is not expected to make a serious move for McCarthy until next summer, though his plans could be brought forward if he can find a buyer for Anderson.

Sir Alex Ferguson has long been linked with interest in Glasgow born midfielder James McCarthy and appears to be ready to consider a summer move for the Wigan Athletic man as the Man United boss continues to plan for the future.

Roberto Martinez will struggle to keep hold of the 21 year old if Man United come calling in much the same way as despite his valiant efforts Victor Moses left for Chelsea last month.

McCarthy is in his fourth season at the DW Stadium having left Hamilton to join the Latics in a £1.2m deal as a much coveted 18 year old. The Republic of Ireland international has notched up 88 appearances for Wigan and is a very able young midfielder who may feel the time is right to move up the footballing ladder.

Ferguson could well feel it’s time to add more youth to his midfield given that his two main-stays, Paul Scholes and Michael Carrick, are 37 and 31 respectively. The Man United manager will also have reservations about Darren Fletcher after his return from illness and could well have run out of patience with Brazilian Anderson after a couple of very average seasons from the former FC Porto man.