White Hart Lane side close in on Russian international.

Tottenham look set to beat Juventus to the signature of Russia star Alan Dzagoev, according to sources in Russia.

The Portuguese is now believed to have set his sights on one-time Arsenal target Dzagoev, who notched three goals at Euro 2012 and impressed with his all-round play despite Russia’s exit at the group stage.

The 22-year-old has gone from strength to strength since joining capital club CSKA Moscow in 2007, with his displays at home and in Europe attracting attention from some of the continent’s biggest sides.
And Spurs are thought to have offered £13.8m for the midfielder – a bid which remains £2.5m short of CSKA’s valuation. 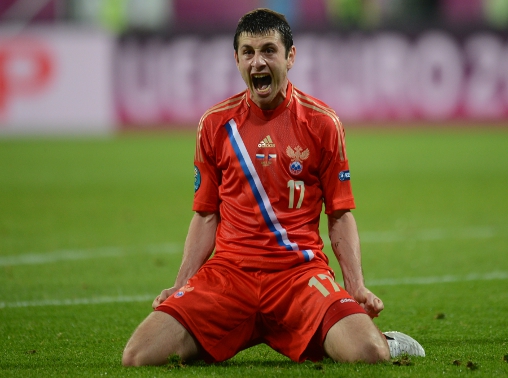 Andre Villas-Boas appears to have turned to young Russian Dzagoev as an alternative to Portuguese international Joao Moutinho, who Tottenham were strongly linked to over the summer, and will hope that the chance of a Premier League move appeals to the CSKA Moscow man.

The 22 year old playmaker enjoyed a productive Euro 2012 even if his side failed to make it out of the group stages and having spent the last five seasons at CSKA the youngster may well feel the time is right for a new challenge. Dzagoev has helped his side to league and cup triumphs during his time at the Luzhniki but any move to sign the midfielder will depend greatly on the North London club coughing up the required fee.

£16.3m would represent less than half the money made from the sale of Luka Modric to Real Madrid and Dzagoev may well be an ideal man to take the Croatian’s spot.

Andre Villas-Boas invested well in the summer and brought in the likes of Moussa Dembele, Emmanuel Adebayor Clint Dempsey and Gylfi Sigurdsson to improve his attacking options but clearly feels he could do with more creativity to help link midfield and attack.

Daniel Levy raked in over £65m from player sales and spent around £55m on new additions so should be able to find the funds to make a significant offer for the Russian international.