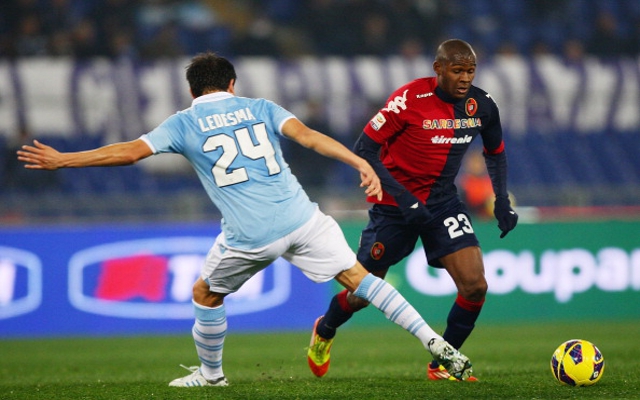 Serie A side once again under fire.

Lazio president Claudio Lotito has claimed the Serie A side’s fans are not racist despite Cagliari’s Victor Ibarbo being targeted with racist chants on Saturday.

“Lazio is always singled out as a racist club, which is not true: we have several black players in our team,” Lotito told Sky Italia.

“However we can’t control the actions of individual supporters.”

Racism in Italian football hit the headlines last week when AC Milan’s Kevin-Prince Boateng responded to racist chants by a small group of fans during a friendly against fourth division side Pro Patria by storming off the pitch.

He was followed by and supported by his team-mates, prompting a global outpouring of applause for the German-born Ghanaian international’s decision to defy match protocol in a bid to stand up against racism.

Some observers, however — including former AC Milan star Clarence Seedorf — had warned that Boateng’s decision threatened to “empower” a racist minority.

And in Saturday’s league game against Sardinian side Cagliari at the Olympic Stadium, monkey noises, aimed apparently at Ibarbo, were aimed at Colombian striker Ibarbo.

Although the majority of the crowd jeered and whistled to drown out the noise, the noises became so persistent that Cagliari’s director general Francesco Marroccu warned the fourth official.

The referee then halted play momentarily to speak to both team captains and order a message to be relayed over the tannoy to warn fans the game would be suspended if the chants continued.

Lazio went on to win 2-1, but this latest incident threatens to reinforce the Rome-based side’s reputation for harbouring fans with far right sympathies.

Earlier this season Lazio were fined for racist chanting in a Europa League game against Tottenham — the English club with arguably the biggest Jewish support in the Premier League.