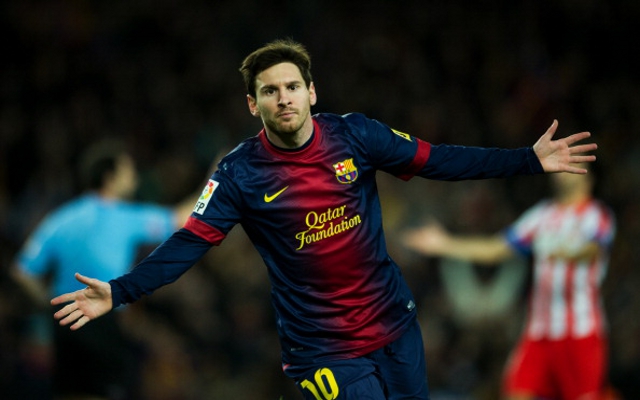 Show your support for the Nou Camp star.

Stats for La Liga and Champions League only.

As ever, Lionel Messi and Cristiano Ronaldo are overwhelming favourites for the Ballon d’Or title.

Here is the case for Argentina star Messi to win the 2012 award.

You can read here.

Lionel Messi has scored a preposterous 90 goals in 2012 at time of writing.

Sure, no one had really considered the calendar year record before Messi got close to overtaking Gerd Muller, but that’s because no one thought it would be beaten.

In the modern game, a striker is considered prolific if he scores more than a goal every two games.

These days, Messi and Ronaldo are expected to score in every game. The Portuguese forward has scored 63 in 2012. Messi has scored 90.

23 of Ronaldo’s goals have been penalties. 14 of Messi’s were from the spot.

The Ballon d’Or is a year-end award, so the calendar year comparison is apt.

Again, the stats are a simple illustration. Cristiano Ronaldo has twelve assists in 2012. Lionel Messi has 24.

With Ronaldo, the game is an solo sport, a relentless pursuit for individual gain.

He is a brilliant player, but often his team-mates appear mere objects positioned to get the best out of him.

Every team featuring Ronaldo has to be built around him, often to its detriment. His lack of tracking back resulted in Wayne Rooney deployed out of position wide left for Manchester United, and Real Madrid’s left flank is almost always open to be exploited.

Lionel Messi could fit into any team in the world – and strengthen it.

The common consensus is that Lionel Messi has never been able to do it for Argentina, whilst Cristiano Ronaldo plays brilliantly for Portugal.

Despite favourable press coverage, Ronaldo only had one excellent game at UEFA Euro 2012 against the Netherlands. He had one other good performance, against Portugal, but in each of his country’s other three matches he was quiet or poor.

He scored five times in 13 international appearances this season.

By contrast, in nine matches for Argentina this year, Lionel Messi scored twelve goals, including a glorious hat-trick against arch rivals Brazil.

In each of Ronaldo’s teams, the gameplan has been effectively ‘give it to Ronaldo so he can shoot.’

If that fails, try again.

It’s remarkably effective against opposition not of the same quality, but he can be found wanting against the top teams – even if his record in recent El Clasico matches is impressive.

Ronaldo has had an average of 7.3 shots per match this season, and scored 14 goals in 16 La Liga starts.

Messi has had 5.2 shots per game, scoring 25 goals in his 15 starts in the Spanish top flight.

All statistics via the brilliant WhoScored.com

Cristiano Ronaldo is generally regarded as one of the greatest dribblers in world football, but unfortunately that is a myth these days.

He only makes 1.1 successful dribbles per game, making him only the 25th best in Spain.

There are no prizes for guessing who the best dribbler in La Liga is.

Of course, the statistics prove it is Lionel Messi – and comfortably too.

Lionel Messi is integral to Barcelona’s play, and involves himself in build up much more than Ronaldo.

As stated above, Ronaldo is a non-creative winger who finishes chances rather than makes them.

However, sometimes it has felt as if Real Madrid are playing with ten men and Ronaldo, such is his weak contribution to the team effort – standing around waiting for the ball to come to him.

Ronaldo has only made an average of 32.6 passes per match in La Liga, or to put a different spin on it, roughly one pass every three minutes.

Messi on the other hand has 57.3 passes per league game, despite playing in the centre forward position.

A striker is typically the most tracked player on the pitch as the man closest to the goal, and Messi often has two central defenders and a defensive midfielder marking him – yet he still manages to involve himself in play far more than Ronaldo.

Cristiano Ronaldo plays as a high forward in the left channel, and has done ever since he joined Real Madrid.

His refusal to move from his favoured position has resulted in his club playing a lopsided formation, and has even resulted in different player recruitment.

In big games, Real Madrid often play Marcelo at left back with Fabio Coentrao as a defensive midfielder on that side – purely to compensate for Ronaldo’s lack of assistance.

Sure, Ronaldo contributes goals, but often it is very little else, and the same cannot be said of his Argentine rival.

Messi currently plays at centre forward for Barcelona, but began his career as an orthodox left winger before being moved across to the right.

Given his propensity to drop deep to pull opposition defenders out of position as his team-mates run beyond him, there seems little doubt that Messi could perform well as an attacking midfielder too.

In fact, a manager could deploy Messi almost anywhere on the pitch and he would perform well, because for him it is all about the team.

Cristiano Ronaldo is arguably the ideal build for a footballer.

His physique allows him to combine strength, power and pace, whilst his fine technique add to that to make a wonderful footballer.

Lionel Messi was not born with such luck, and a growth hormone deficiency meant that he grew up smaller than average.

The fact that he is still able to compete against – and usually defeat – players larger than him is testament to his skill and talent.

What’s more, Messi will try things that many would not even consider.

Take his second goal of four against Arsenal in the 2010 UEFA Champions League quarter final. Messi’s close control was remarkable, and he managed to dink the ball over Manuel Almunia to set himself up to volley into an empty net.

Any other player would have shot at that moment, and it is worth mentioning that for all the times Messi is compared with a Playstation player, in that moment he performed something that isn’t even possible on any computer game (to our knowledge).

There are countless other examples.

Despite his clear position amongst the best in world football, Lionel Messi continues to improve.

Amongst the hardest trainers at FC Barcelona, he has demonstrably shown progression in multiple areas of his game.

His heading was once something Ronaldo’s fans used to decry Messi, with their Portuguese star’s favourable record in the air ammunition in the debate.

Similarly, Ronaldo’s free kick ability was once seen as superior to that of the Argentine, but no longer.

Ronaldo scored his first goal from a dead ball against Atletico Madrid on December 1st.

Two months into this season, Messi already had four strikes from free kicks – and so many of his goals are spectacular.

Heading might now be the only thing Ronaldo is actually better at – and that is only because of his build.

In the last two years, Lionel Messi is challenging those conventions – and it’s not just this year that he