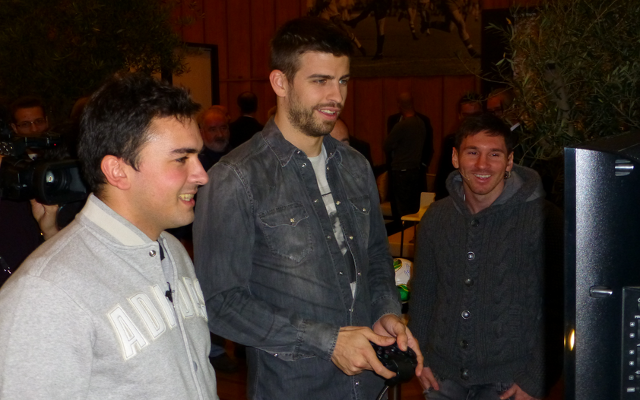 Imagine winning big bucks and meeting top players just because you happen to be damn near unbeatable at FIFA 13?! Living the dream.

The 2012 FIFA Interactive World Cup (FIWC) ‘12 winner, Alfonso Ramos, 24, yesterday lived every football fan’s dream as he attended the FIFA Ballon d’Or gala, met a host of the world’s top footballers and took on Barcelona star Gerard Piqué at a game of FIFA 13.

Alfonso stormed to victory at the FIWC ’12 in Dubai beating former champion Bruce Grannec in a tense penalty shoot-out on the way to the $20,000 prize and invitation to the FIFA Ballon d’Or as a FIFA world champion.

Real Madrid met Barcelona at the FIFA Ballon d’Or as Real Madrid fan Alfonso took on Barca ace Gerard Piqué. In the virtual El Classico it was Alfonso’s Madrid who came out on top, beating Piqué’s Barcelona 3-1 as Ronaldo bagged two goals. The encounter lived up to the drama, surprise and controversy expected of one of the World’s greatest football clashes.

As the game approached half-time Alfonso’s Real Madrid led Piqué’s Barcelona 1-0, thanks to Ronaldo’s first of the match. But in a moment of madness that was tinged with irony, Pique made a rash challenge and saw himself sent off and Barcelona go down to 10 men as they went in for halftime.

Prior to the match Alfonso benefitted from speaking with football legends Andres Iniesta and Lionel Messi, who gave him some advice on how to deal with big game pressure and get results against their compatriot Piqué.

Commenting on the match Alfonso said, “Winning the FIWC and getting the chance to attend the FIFA Ballon d’Or really is a dream come true. For any football fan this is without question one of the greatest experiences you can have. Meeting my heroes an getting the chance to play FIFA 13 against Pique is something I will never forget.”

Despite his loss, Piqué was full of praise for Alfonso, “Alfonso is the best player I have played against for sure. I don’t play FIFA as much as I’d like to, but I’m usually in the final against Leo (Messi) when we play at Barcelona so I’m not bad, but against Alfonso every player seems bad!”

The FIWC is a virtual football tournament organised by FIFA and its presenting partners EA SPORTS™ and PlayStation®. With over 1.6 Million players already signed up for this year’s tournament the FIWC cements its place as the world’s largest online gaming tournament giving football fans the chance to live out their passion for the game and to interact with other fans around the world.

The FIWC 2013 sees players compete against each other at the latest version of the EA SPORTS™ FIFA 13 videogame to qualify for the Grand Final in Madrid, where the FIWC World Champion is crowned. The online tournament takes place on the PlayStation® Network and can be accessed through FIFA 13. Contestants can participate in this year’s FIWC, by registering ‘in-game’ in FIFA 13 on their PS3™. For more information on the FIWC, go to: www.fifa.com/fiwc.