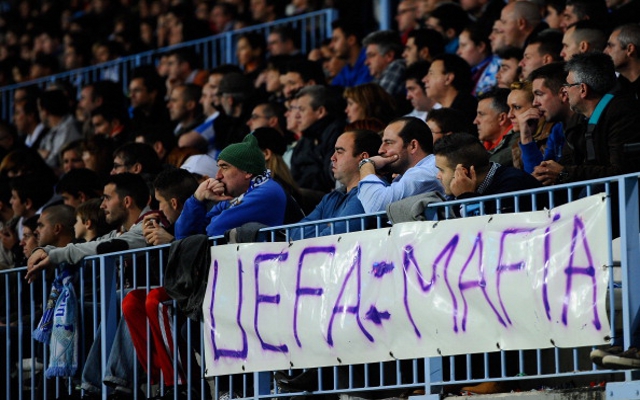 La Liga side feel they have become UEFA scapegoats.

Spanish side Malaga on Tuesday confirmed they will appeal a one-year ban from European competition following a row over financial irregularities.

Malaga insist they have been made “scapegoats” and will take their case to the Court of Arbitration for Sport (CAS).

“In accordance with upholding our rights and with the intention of arguing they be respected before the tribunal, the (club) will appeal the sanction to the CAS,” the southern outfit said after receiving confirmation of the sanction on Monday.

European football’s governing body UEFA said last month that Malaga would be barred from playing in either the Europa League or Champions League when they next qualify and the prospect of a second, year-long ban if they failed to clear debts.

The Liga club were given a deadline of March 31 next year to prove they had “no overdue payables” to clubs, employees or the tax authorities.

They insist they have already set in train financial restructuring in line with UEFA’S fair play rules and last month blasted the punishment as “absolutely disproportionate and unjustified”.

A club statement at the time read: “An unfair punishment is being applied to make an example of the club, turning it into a scapegoat.”

Malaga, who are currently sixth in La Liga, are still hoping to bag a fourth-place finish which would enable them to compete once again in the Champions League next season.

Nine European clubs were referred to UEFA’s financial regulators because of debt problems, as the ruling body seeks to clamp down on clubs spending beyond their means and target infringements of licensing agreements.

Five other clubs face one-year European bans should they qualify over the next three seasons: Croatian sides Hajduk Split and Osijek; Romanian clubs Dinamo Bucharest and Rapid Bucharest; and Partizan Belgrade of Serbia.

Malaga spent nearly 60 million euros on new players last year but failed to meet a deadline to show they had cleared overdue payments.

The club is owned by Sheikh Abdallah Ben Nasser Al-Thani, a member of the Qatar ruling family.