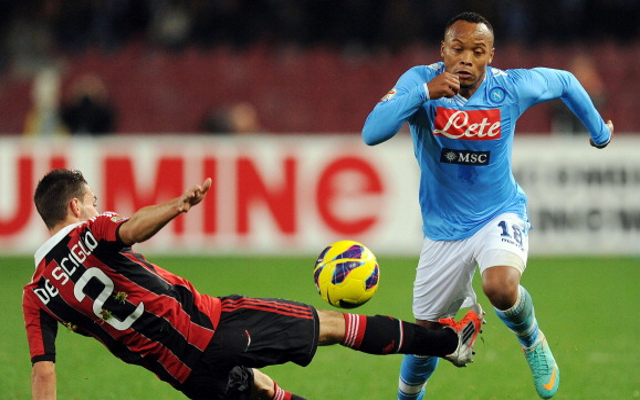 Juan Camilo Zuniga on his way to the Nou Camp?

Colombian international full-back Juan Camilo Zuniga is set to be in a tug of war battle between Barcelona and Premier League clubs with the Napoli star a man in demand.

The 27-year-old has been an impressive part of Walter Mazzari’s Napoli squad in Serie A for the past four seasons since signing from Siena in a £7million deal in 2009. He had previously been with Atletico Nacional in Colombia.

Zuniga has been watched in action for Napoli by scouts from Spanish giants Barcelona and a host of Premier League clubs, and several parties have been impressed and are considering bids in excess of £10million.

His representatives are quoted as telling Radio CRC: “I will not confirm anything in particular. But there are several teams at the highest level in Spain and the Premier League who are tracking him. I think it’s normal, because he is a player that every big club could use. Barcelona are following him, and also Juan Fernando Quintero.”

Colombian Juan Fernando Quintero, an international team-mate of Zuniga, is a 20-year-old midfielder also playing in Serie A with Pescara.