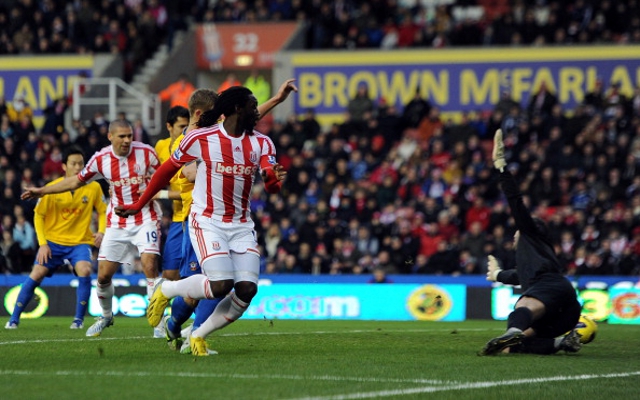 Swansea City have had a £3million offer rejected by Stoke, who signed Jones for £8million from Sunderland in 2010, but are understood to have upped their bid for the Trinidad & Tobago international targetman to £4.5million.

With Jones having just 18 months of his current contract, Stoke are considering selling the striker and Pulis, who has a fit-again Peter Crouch available for selection, has promised to allow him to leave if that is what the player wants.

“If an offer comes in for any player in the Premier League and it’s the right offer then you look at it and then speak to the player,” Pulis said after his side had been beaten 3-1 by Swansea City on Saturday, a game in which Jones was a second-half substitute.

“There is an offer there and it’s around about what the club would expect, but I’ve said to the player if you don’t want to leave mate, then you can stay, and he wants to stay.

“This is the position [with Kenwyne]. We are in no financial trouble at this football club. We run the club soundly and I’m honest with the players. If it comes to a point where we accept an offer from Swansea then it will be down to Kenwyne whether he wants to go on that. Because if he says no, there will be no problems with me.”