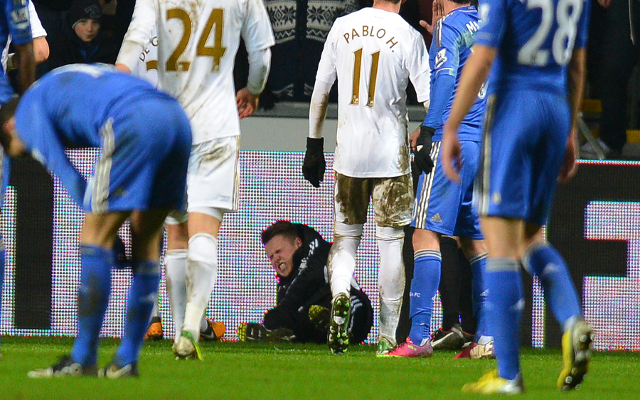 Chelsea youngster Eden Hazard faces a police investigation after he was given a red card for kicking a ball boy in his side’s League Cup semi-final second leg at the Liberty Stadium.

With the match poised at 0-0, and Chelsea chasing a 2-0 aggregate deficit, Hazard became annoyed with a ball boy who failed to return the ball promptly after it went out of play for a Swansea goal kick with 10 minutes left.

Hazard appeared to kick the youngster as he tried to retrieve the ball from underneath him and after a delay of several minutes, the Belgian midfielder was shown a straight red card by referee Chris Foy.

“We are making arrangements for him (Hazard) to be interviewed. South Wales Police takes such matters very seriously.”

Chelsea interim manager Rafael Benitez revealed that Hazard had said sorry to the boy, but criticised the youngster for failing to return the ball more quickly.

“Eden Hazard has been in to see the ball boy and the two have apologised to each other,” he said.

“The ball boy knows he was wasting time. They apologised and they know that it is a mistake.

“We can’t change the situation. We are disappointed to lose the player but we cannot change things and the best thing for us is to move forward.”

“(Chelsea striker) Demba Ba told me that the boy held onto it,” he told Sky Sports after the final whistle.

The match ended 0-0, sending Swansea into their first major final, where they will meet fourth-tier Bradford City.

“Has football gone mad? Hazard is sent off for kicking the ball under a ball boy attempting to smother the ball rather than return it,” the club wrote on the account, which has over 1.79 million followers.

Swansea manager Michael Laudrup predicted that Hazard would quickly see the error of his ways, but said the club had not instructed their ball boys to waste time by holding onto the ball when it went out of play.

“I saw it from very distant, obviously from the bench, and just saw it (again) after the game,” he said.

“I think Hazard is a great player. I think when he sees the images on TV, he will regret it.”

On suggestions the ball boy was deliberately holding up play, Laudrup said: “No, definitely not. He was pushed and he was on top of the ball.

“I can understand you’re frustrated when you’re behind and your pulse is going, but there are things you should never do.”