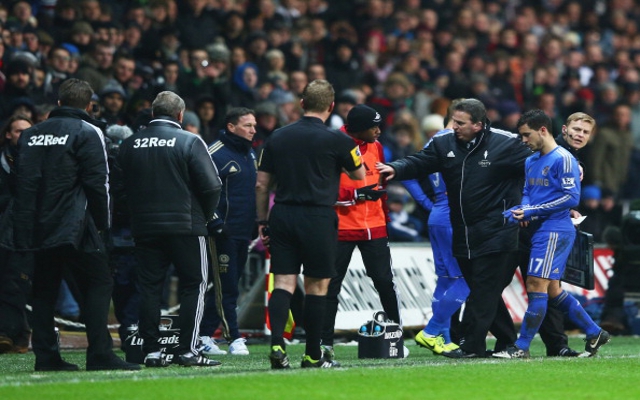 Stamford Bridge star could be out for some time.

Eden Hazard is facing the possibility of an extended ban for kicking a ball boy after the Football Association charged him over his red card in Chelsea’s League Cup exit at Swansea.

Belgian forward Hazard was already set to serve an automatic three-match ban for his red card in Wednesday’s semi-final second leg at the Liberty Stadium, where a goalless draw condemned Chelsea to a 2-0 aggregate defeat.

However, the FA insisted Friday that constituted an “insufficient” punishment for the offence.

“It is alleged that Hazard’s behaviour in relation to a Swansea ball boy, for which the player was dismissed in the 78th minute, constituted violent conduct whereby the standard punishment that would otherwise apply was clearly insufficient.

“The FA will remind all clubs of their responsibilities in ensuring ball boys and other personnel around the pitch act in an appropriate manner at all times and will liaise with competitions accordingly.”

Hazard was sent off by referee Chris Foy for kicking Charlie Morgan, the 17-year-old son of Swansea’s biggest shareholder, in the closing stages of Wednesday’s match at the Liberty Stadium.

The Belgium international lost patience when Morgan refused to hand over the ball after it had gone out for a goal-kick.

Morgan fell to the ground as Hazard attempted to get the ball from him, with the 22-year-old then trying to kick it from under him but appearing to instead make contact with the youngster.

However, some leading figures within English football felt Hazard had been harshly treated already.

“Hazard toe-poked the ball under the boy’s body,” said Harry Redknapp, the QPR manager. “Why is the kid lying on the ball in the first place?”

“You can imagine the frustration — you’re a player trying to reach a cup final but there’s this kid behaving like an idiot who won’t give you the ball back.

“The boy was tweeting before the game that he’s a super time waster. The way he behaved was disgusting.”

In the early hours of Friday, Morgan tweeted: “Crazy 24 hours. Spoke to Hazard and I will not be pressing charges. Be in touch.”

Despite that, South Wales Police have been obliged to continue investigating the incident after receiving three complaints.

It was assumed Hazard had avoided criminal charges when the matter was dropped after he and the teenager met and made mutual apologies.

It then emerged Morgan was the son of millionaire Swansea director Martin Morgan, with the family having amassed a £42 million ($66.3m) fortune through owning and selling a travel agency and then investing in boutique hotels.