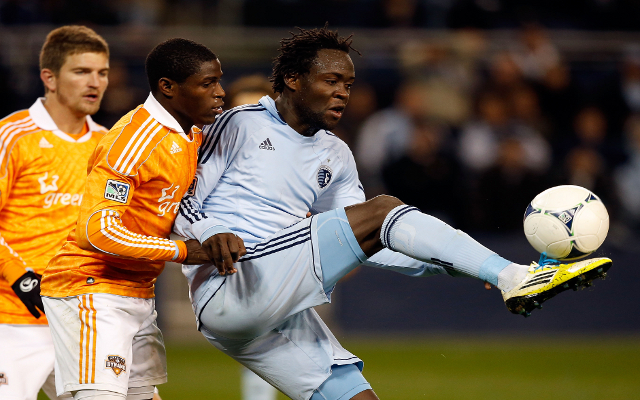 Norwich City are tracking striker Kei Kamara, one of the star of the MLS, over a potential move to Carrow Road this month.

Manager Chris Hughton has struggled to make a breakthrough so far this month in his quest to add a new forward to his contract, with two bids for Celtic frontman Gary Hooper turned down and an offer on the table for Swansea City’s Danny Graham, who is also on Sunderland’s wanted list.

And, speaking to reporters ahead of his club’s FA Cup fourth round clash with Luton Town, Hughton has now revealed that Sierra Leone international striker Kamara, who spent a spell on trial at Stoke City in December, could be offered a deal to join Norwich City.

“Kei Kamara is a player we have made enquiries about, but any progress remains behind closed doors,” Hughton said of the 28-year-old Kamara, who emerged through the United States collegiate system before graduating into the MLS where he currently plays for Sporting Kansas City.

Norwich have also been credited with interest in Leeds United forward Luciano Becchio, who has submitted a transfer request, and Queens Park Rangers’ Jamie Mackie, who has fallen down the pecking order following the arrival of Loic Remy at Loftus Road.