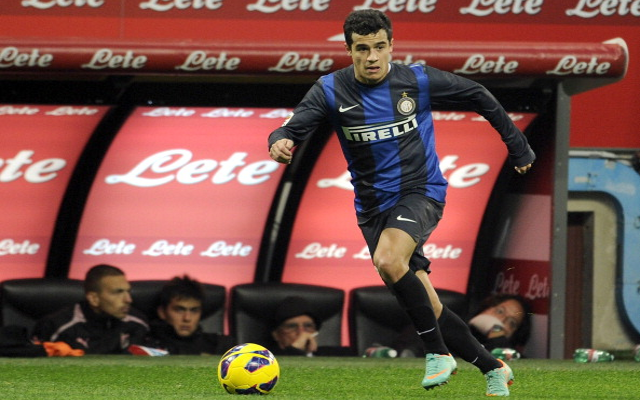 Brazilian starlet on his way to Anfield.

Liverpool have agreed a deal to sign Brazilian international Philippe Coutinho according to the BBC.

The Anfield side will pay £8.5m for the 20 year old who will travel to Merseyside early next week for a medical. The club will also have to make a successfully work permit application before any deal can be officially completed.

Inter Milan had rejected two earlier Liverpool bids whilst accepting a from Southampton. However the Merseyside club have now matched the San Siro side’s asking price and the Brazilian international is said to have preferred a move to join Brendan Rodgers’ side where he will join fellow national team-mate Lucas Leiva.

Having sold Wesley Sneijder Inter Milan are looking to continue their cost cutting drive and feel that they can afford to cash in on Coutinho as he hasn’t been a crucial member of Andrea Stramaccioni’s Nerazzurri first team set-up.

The 20 year old was once dubbed the ‘Next Kaka’ and is a player who would considered the next superstar of South American football, but to be fair the former Vasca da Gama playmaker has struggled to live up to expectations over the course of the past couple of seasons.

Brendan Rodgers has reportedly been scouting the San Siro youngster, who has become something of a bit-part player under boss Andrea Stramaccioni this term.

Last season Coutinho experienced some success whilst on loan at La Liga side Espanyol, netting five goals 16 appearances for the Barcelona based side.