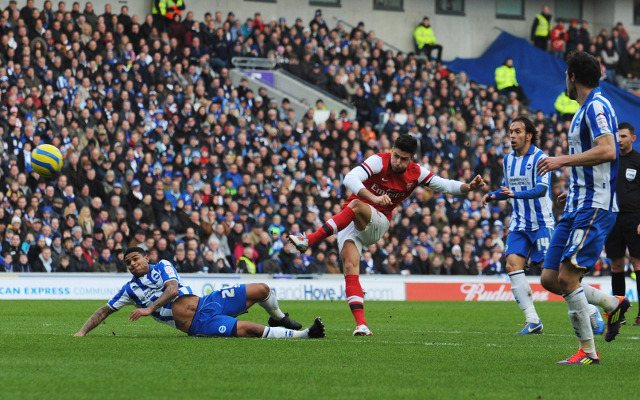 Theo Walcott netted a late winner to see Arsenal past Brighton and into round five.

Theo Walcott stepped off the bench to bag the late winner that brought relief to Arsenal manager Arsene Wenger as the Gunners secured a place in the FA Cup fifth round with a 3-2 victory at Brighton on Saturday.

Wenger had gambled with his starting line-up by resting a number of his first choice stars and the Frenchman’s plan seemed destined to back-fire as Championship side Brighton dominated for long periods at the Amex Stadium.

Twice Arsenal went ahead through Olivier Giroud but Brighton recovered on both occasions, first through Ashley Barnes and then through debutant Leonardo Ulloa.

But Walcott, who was finally introduced in the 68th minute along with Jack Wilshere, hit the winning goal late on to ensure Arsenal avoided another setback in their erratic campaign.

Like Wilshere and Walcott, Santi Cazorla was named among the substitutes and Wenger switched his back four as well, with first choice full backs Bacary Sagna and Kieran Gibbs standing down while skipper Thomas Vermaelen was out injured.

The sight of the Gunners team-sheet undoubtedly gave Brighton a lift before kick-off.

And the hosts came within inches of making the perfect start in the 14th minute when Ulloa headed into the path of Barnes, who had broken free inside the Arsenal box but screwed his right foot shot wide.

Arsenal had shown little to that point but the chance stung them into action and they were ahead two minutes later through Giroud.

Tomas Rosicky surged forward from halfway before playing the ball into Lukas Podolski.

Podolski’s lay-off fell perfectly into the path of France striker Giroud, who took one touch before placing a crisp left foot shot into the top corner from the edge of the Brighton area.

That should have been the signal for Arsenal to settle and assume control of the game but Brighton reacted well, dominating the game before claiming an equaliser through Barnes.

Prior to the leveller, the striker had come close when Will Buckley flashed a cross in front of the Arsenal goal while Ulloa had seen a similar effort ruled out for offside.

But there was no disputing the validity of the strike or the shoddy nature of Arsenal’s defending when Barnes connected with David Lopez’s corner.

The Brighton man was allowed to drift clear of Per Mertesacker before heading powerfully past Wojciech Szczesny in the 33rd minute.

Just as they had in the first half, Arsenal produced a goal against the run of play with Giroud again displaying the qualities that earned him an £11 million move from Montpellier.

This time the opening was created by Abou Diaby’s chip forward that Giroud brought down expertly before placing the ball beyond Casper Ankergren in the 56th minute.

Yet Brighton showed great resolve to hit back quickly, once again exposing the frailties of Arsenal’s patched up defence.

Barnes was again involved, collecting the ball from right-back Inigo Calderon and whipping in a right wing cross towards Ulloa, who finished past Szczesny with a diving header from eight yards out.

Albion deserved to be on level terms and Wenger betrayed his concerns by introducing Walcott and Wilshere as the tie remained evenly poised.

And the move paid off in the 85th minute when Ankergren failed to clear his lines as he attempted to punch Wilshere’s corner clear.

The ball fell to Walcott on the edge of the area and his volley was deflected off Brighton centre-back Adam El-Abd and beyond the home keeper.