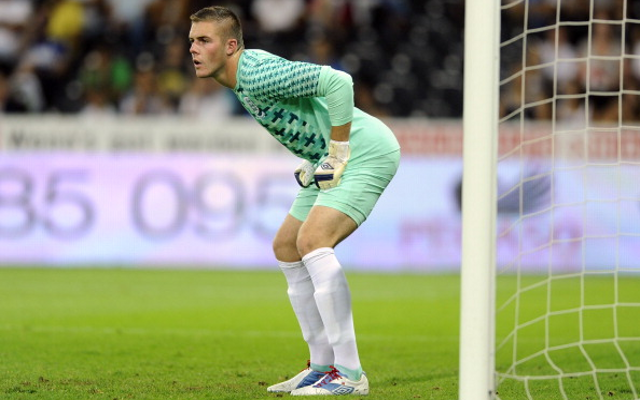 Birmingham City goalkeeper on his way to the Britannia Stadium.

Stoke City have had an offer accepted for Birmingham City goalkeeper and are set to complete the signing of the England under-21 international.

According to Sky Sports, an offer in the region of £5million has been accepted by the Championship club and the 19-year-old will officially become a Stoke City player later today. He will, however, remain on loan at Birmingham City for the remainder of the season.

He is expected to become Stoke’s number one goalkeeper next season as a replacement for Asmir Begovic, who is likely to be sold in the summer with Manchester United, Manchester City and Liverpool among his suitors.

Stoke were the seventh Premier League to register an interested in Butland, who was also being courted by Chelsea, Liverpool, Everton, Newcastle United, Fulham and Southampton, who had a £6million offer turned down for Butland in the summer.

Chelsea were understood to have wanted Butland on Wednesday but the 19-year-old turned down the chance to talk to the Stamford Bridge club with first-team football his priority. He did not fancy his chances of dislodging Peter Cech from the number one spot at Chelsea following the goalkeeper’s signing of a new contract.

Video: Jack Butland transfer to Liverpool might be the worst idea ever judging by this clip of his recent errors Oct 11 2020, 10:52
Liverpool FC

Liverpool in talks over signing Adrian replacement who could make debut vs Everton next Saturday Oct 11 2020, 6:28
Liverpool FC