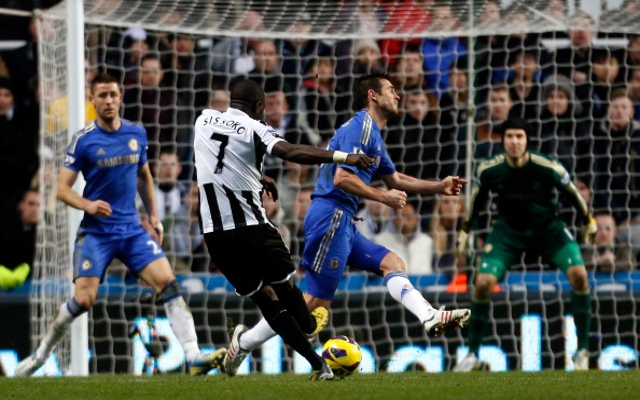 New signing Moussa Sissoko claimed a second-half brace to give Newcastle United a 3-2 win at home to Chelsea on Saturday that prevented the visitors from making ground on the Premier League’s top two.

Chelsea striker Demba Ba endured a torrid return to St James’ Park, getting jeered by the fans of his former club and taking a kick to the face from one-time team-mate Fabricio Coloccini before being replaced by Fernando Torres.

By then, Newcastle had taken a 41st-minute lead through a Jonas Gutierrez header, but Frank Lampard equalised 10 minutes into the second half with a thumping strike from 25 yards.

A curling effort from Juan Mata gave Chelsea the lead for the first time six minutes later, but Newcastle came back again and drew level when Sissoko finished after Petr Cech saved from Yoan Gouffran.

To Chelsea’s cost, there was more to come from the former Toulouse man, who crashed home a low shot from Santon’s pass in the last minute to give Newcastle consecutive victories for the first time this season.

“I don’t need to say anything because his performance said it all,” said Newcastle manager Alan Pardew of Sissoko.

“I remember watching him for Toulouse 14 months ago, and I thought he was the one for us. We watched him and set our sights on him for a long time.”

“There were too many mistakes,” said Chelsea interim manager Rafael Benitez.

“I could see a red card that was not shown for Fabricio Coloccini. We had a chance and Demba Ba received a broken nose, it is bleeding.”