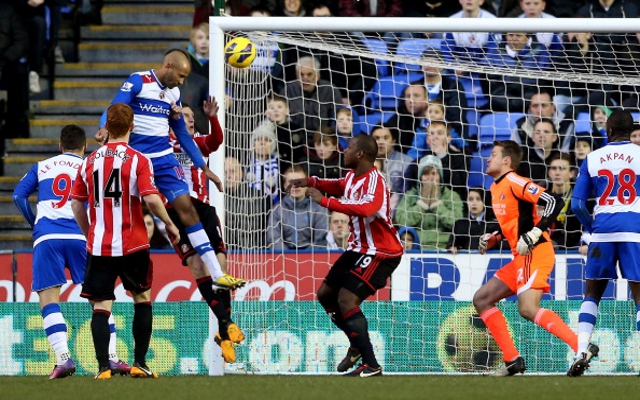 Jimmy Kebe netted twice to help pull Reading out of the bottom three.

Former Mali international Jimmy Kebe scored twice as Reading’s battle to avoid relegation was boosted by a 2-1 win over Sunderland at the Madejski Stadium on Saturday.

The visitors appeared to be heading for at least a point after dominating large periods of the second half.

But they threw the match away with a defensive lapse that allowed Kebe to head home Ian Harte’s 85th-minute free-kick in a thrilling finale.

The home side came into the match above the relegation zone only on goal difference but got off to a perfect start on six minutes.

Kebe latched onto a pass from Jamaican captain Jobi McAnuff, skipped past John O’Shea and blasted the ball past Belgian ‘keeper Simon Mignolet for the opener.

Sunderland, who had come back to win after conceding the opening goal just once in the last four years, drew level on 29 minutes with a penalty.

Russian striker Pavel Pogrebnyak hacked down former Manchester United defender O’Shea who made up for his earlier defensive lapse by winning the race to a loose ball in the box and provoking the unprovoked challenge.

Midfielder Craig Gardner stepped up and hit a well struck penalty that beat the dive of Australian ‘keeper Adam Federici.

Sunderland had a strong penalty shout on 69 minutes when Frenchman Alfred N’Diaye was convinced he was brought down by Irishman Stephan Kelly only for referee Lee Mason to ignore the appeals.

N’Diaye then had the winning goal on his boot with time running out as he broke free into the box on 82 minutes but screwed his shot well wide of the goal.

The visitors were made to pay for that miss in a late twist when Reading snatched the three vital points with Kebe’s dramatic intervention.