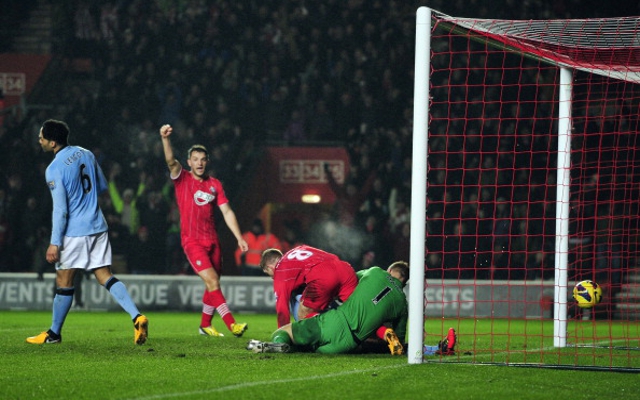 Southampton effectively handed the Premier League title to Man United with a superb victory over Man City at St Mary’s.

Manchester City’s hopes of retaining the Premier League title were in tatters on Saturday after they crashed to a shock 3-1 defeat at Southampton, while Chelsea eased the pressure on manager Rafael Benitez with a 4-1 win over Wigan.

Roberto Mancini’s side needed a victory at St Mary’s to keep the pressure on leaders Manchester United, but instead they slumped to their third league defeat of the season.

Jason Puncheon and Steven Davis put Saints 2-0 ahead by the 22nd minute and, although Edin Dzeko got one back before the break, a Gareth Barry own goal early in the second half sealed City’s fate.

Mancini’s second-placed team have now gone three league games without a win and they remain nine points behind United, who host Everton on Sunday.