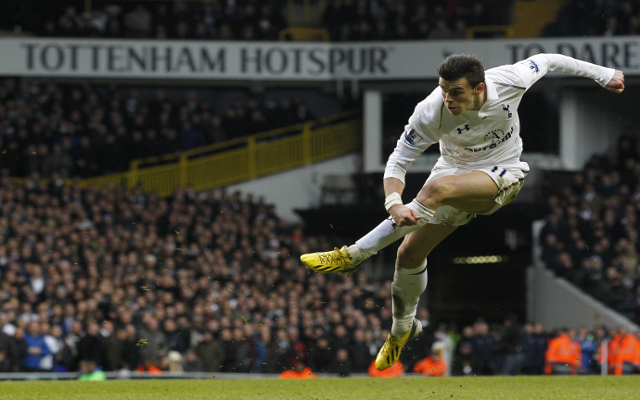 Man United boss Sir Alex Ferguson will receive the backing of his Old Trafford board to launch a big money bid for Tottenham winger Gareth Bale and has made the Welsh international his number one summer transfer target.

The White Hart Lane star has been in excellent form this season and has a number of prospective suitors and Man United’s main competitor in the pursuit of the 23 year old will be Real Madrid, who have sent scouts to monitor the former Southampton man on a number of occasions this season.

Ferguson has been tracking Bale’s progress for some time and will look to make an offer for the Tottenham man in the summer transfer window and is ready to break the club’s transfer record to secure a deal to sign the goal-scoring wide-man. Though the Man United boss signed young Crystal Palace attacker Wilfried Zaha last month, sending the 20 year old back to Selhurst Park to see out the current campaign, the Scot doesn’t see the England man as an instant member of his first team and he could well be loaned out next term as well.

Ferguson is keen to bring in a goal-scoring wide-man to help complement his main central striking options. Amazingly first choice wingers Ashley Young and Luis Antonio Valencia haven’t managed a single goal between them this term in 31 combined starts in all competitions.

Another wide attacker, Danny Welbeck, has scored just one goal in 26 appearances and Ferguson feels that the addition of Gareth Bale would give his attack more balance.

Man United are willing to launch an opening bid of £40m and having previously managed to lure the likes of Dimitar Berbatov and Michael Carrick from the North London club Sir Alex Ferguson may well be confident he can sign the Tottenham man.

Undoubtedly the ace in his pack is the fact that he will be offering Bale the chance to step into the shoes of his childhood hero Ryan Giggs, an opportunity Bale would surely find very hard to turn down.

Gareth Bale has scored 15 goals in 29 appearances this season and one imagines the chances of the in-form attacker remaining at Tottenham beyond the current campaign would be significantly compromised if Andre Villas-Boas’s side fail to secure a Champions League berth for next term.