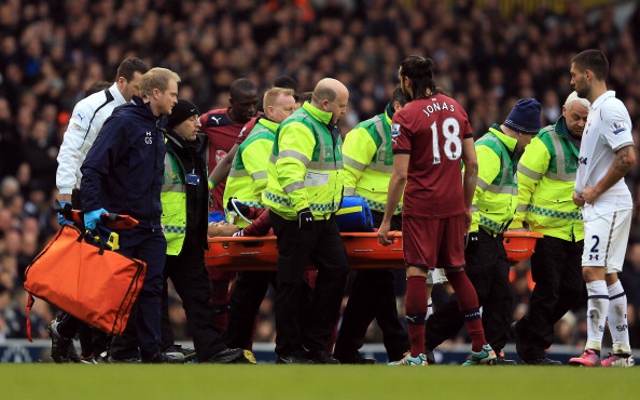 St James’ Park striker did not break leg in defeat at Tottenham.

Newcastle United have received an injury boost after it emerged French striker Yoan Gouffran did not break his leg in the club’s 2-1 defeat at Tottenham on Saturday.

Gouffran left the White Hart Lane pitch on a stretcher with his leg in a splint and needing oxygen after suffering a gash in an innocuous challenge with Tottenham defender Kyle Walker during the second-half.

It was feared that Gouffran, who had scored his first goal for Newcastle in the opening half to level Gareth Bale’s opener, could have broken his leg as a result of the collision with Walker, whose leg followed through after clearing the ball.

But Newcastle have released a statement with the news that x-rays have shown not break of 26-year-old Gouffran’s leg although the full extent of his injury is still unknown.

A club statement read: “Newcastle United are pleased to report that a precautionary X-ray has shown that Yoan Gouffran has not broken his right leg.

“The French forward was stretchered off during the second half of Saturday’s 2-1 defeat at Tottenham Hotspur, and Gouffran will be further assessed on Sunday by the club’s medical staff.”

Gouffran joined Newcastle in the January transfer window in a cut price £1.2million deal from Bordeaux, who opted to sell him with six months remaining on his contract rather than lose him for free in the summer.

He signed a four-and-a-half year contract on Tyneside and has played in all three games for Newcastle since signing for the club.