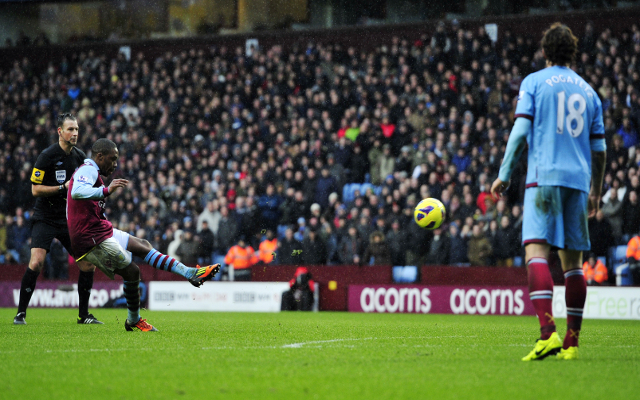 Charles N’Zogbia inspired Aston Villa to a crucial 2-1 win over West Ham as the Premier League strugglers climbed out of the relegation zone on Sunday.

Paul Lambert’s team have endured a miserable campaign filled with embarrassing cup exits and woeful league defeats, but N’Zogbia’s influential display gave Villa renewed hope that they can at least avoid sinking into the Championship.

N’Zogbia won the penalty that Christian Benteke converted to break the deadlock in the closing stages at Villa Park and the former Wigan winger then curled in a superb free-kick to give the hosts much-needed breathing space.

An own goal from Villa’s Ashley Westwood ensured a nervous finale, but Lambert’s men held on for their first league win in 10 matches, a dismal run that stretched back to a victory at Liverpool in December.

Villa now sit one point clear of the bottom three but their battle to preserve their long-held top-flight status looks certain to go down to the wire.

“I think it will be huge for us. We’ve taken a lot of knocks but football is a funny game and we are only three points behind Newcastle now,” Lambert said.

“We know what we have got to do and there’s 12 games to go. Every game is really tough, but that was a huge win for us, especially with the results for the teams around us this weekend.”

After squandering a 3-1 lead in their previous match at Everton last weekend, it was hardly surprising that Villa’s players and fans seemed wracked by nerves in the early stages.

They should have been ahead after just two minutes but when Jussi Jaaskelainen spilled Benteke’s shot into Andreas Weimann’s path the Austrian forward somehow fired wide.

Villa defender Ron Vlaar came close to opening the scoring with a half-volley from a corner but his effort was narrowly off target.

Sam Allardyce’s visitors were slightly more threatening after the break and Villa fans’ anxiety was clear to see when Ciaran Clark headed clear from a corner, prompting ironic cheers from supporters still scarred by their team’s shocking defending from set-pieces this season.

But Villa gradually regained the momentum and Benteke lashed just wide before the hosts finally took the lead in the 74th minute.

N’Zogbia was the catalyst with a clever turn in the penalty area that forced Mark Noble to trip the winger and Benteke stepped up to send Jaaskelainen the wrong way with his spot-kick.

Villa doubled their lead four minutes later when N’Zogbia curled a fine free-kick over the static West Ham wall and past the flat-footed Jaaskelainen.

Even with a two-goal lead there was still an air of tension around Villa Park and the nerves really started jangling when Westwood, attempting to clear a Joe Cole cross, could only loop it into his own net.

West Ham surged forward in search of an equaliser, but Villa goalkeeper Brad Guzan came to the rescue, blocking a Kevin Nolan shot with his legs and then denying Carlton Cole in stoppage-time.