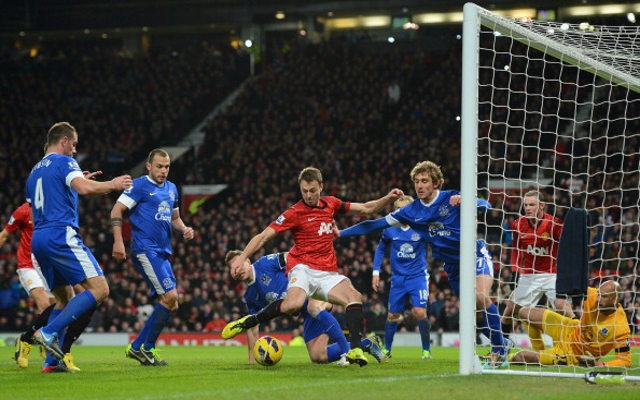 Man United extended their lead at the top of the table to 12 points as Ryan Giggs and Robin Van Persie scored to hand Sir Alex Ferguson’s side all three points.

Ryan Giggs and Robin van Persie scored the goals as Manchester United opened up a commanding 12-point lead at the top of the Premier League after a 2-0 win over Everton on Sunday.

With Real Madrid manager Jose Mourinho watching from the directors’ box at Old Trafford ahead of his team’s Champions League tie against Alex Ferguson’s side at the Bernabeu on Wednesday, United took full advantage of second placed Manchester City’s surprise defeat at Southampton on Saturday.

Giggs opened the scoring early on with his first league goal of the season, maintaining his astonishing record of having scored a league goal in each of his 23 seasons as a United player, a sequence which now covers every year in Premier League history.

Van Persie got the second just before the break and, with City stumbling of late, the destiny of the title is firmly in United’s hands once again.

United should have taken the lead after 10 minutes and would have done so but for an uncharacteristic error by the prolific van Persie, who collected Wayne Rooney’s through ball and rounded goalkeeper Tim Howard only to hit the outside of the post as he attempted to convert.

It was a rare slip by a forward just two goals shy of the 20-league goal barrier, but it did not take the Dutchman long to make amends as he set up Giggs for a 13th minute opening goal.

Antonio Valencia out-jumped Leighton Baines to head on a long ball from Jonny Evans which van Persie collected. His pass was perfect for Giggs, who had the time to steady himself before clinically placing the ball past Howard.

De Gea was required to be far more alert just before the half hour, however, when he dived acrobatically to his left to keep out an Osman volley from the edge of the area which appeared destined for the corner of the United goal.

Buoyed by their best passage of the game, Everton also asked questions of the United defence when Rafael da Silva was forced into a goal-saving challenge on Victor Anichebe, who looked poised to covert a Kevin Mirallas cross and, again, when Osman flashed a hopeful volley wide after a poor punch from de Gea.

But, on the stroke of half-time, Everton’s tactic of playing a high defensive line to try and catch van Persie offside failed as Rafael played through a perfectly-weighted pass and the Dutchman timed his run superbly.

With Phil Neville playing him onside, van Persie sped away from Heitinga and rounded Howard, this time succeeding where he had failed earlier and converting despite the defender’s attempt to clear off the line.

The timing of that second goal proved significant and took away the momentum Everton had been building prior to half-time.

United easily negotiated the opening 20 minutes of the second half without allowing Everton any foothold in the game and should, in fact, have extended their lead after 66 minutes.

Van Persie’s right-wing corner was flicked on at the near post by Giggs and, having seen his initial header blocked by Howard, Evans had two more unsuccessful attempts to force the ball over the line.

The league leaders maintained the pressure seconds later when Tom Cleverley met a half-cleared corner and saw his 20-yard volley tipped over the bar expertly by Howard and van Persie rolled a shot wide after being set up by Giggs.

Osman looked Everton’s best hope of getting off the mark with some creative midfield play but it was a mistake by United substitute Chris Smalling that let in Nikica Jelavic for an 82nd minute shot which was well saved by de Gea.