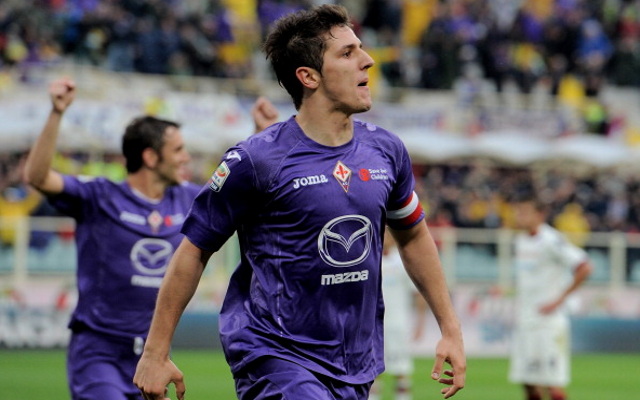 Etihad Stadium side to make big money offer for Serie A hot-shot.

Man City are reportedly planning to make an offer in the region of £25m for Fiorentina striker Steven Jovetic according to TuttoMercato.

Roberto Mancini may well feel the need to strengthen his attack and has been scouting the Montenegrin for some weeks and the departure of Mario Balotelli last month will have led the Man City boss to look for possible additions to boost his attack.

Top scorer Edin Dzeko is still seemingly not a nailed on first team starter and though Sergio Aguero has improved of late he is a shadow of the player who had an outstanding first season at the Etihad Stadium last term. Carlos Tevez hasn’t scored in eight Premier League matches so clearly Mancini may have his sights set on summer additions.

Jovetic has impressed at Fiorentina over the past 18 months, during which time he has been converted into a central striking weapon, netting 14 goals in 27 games last term and has another nine to his name thus far this term.

The Florence based club may struggle to turn down a £25m offer and having brought in Giuseppe Rossi from Villrreal there is perhaps a possibility the Serie A side will look to cash in on Jovetic.