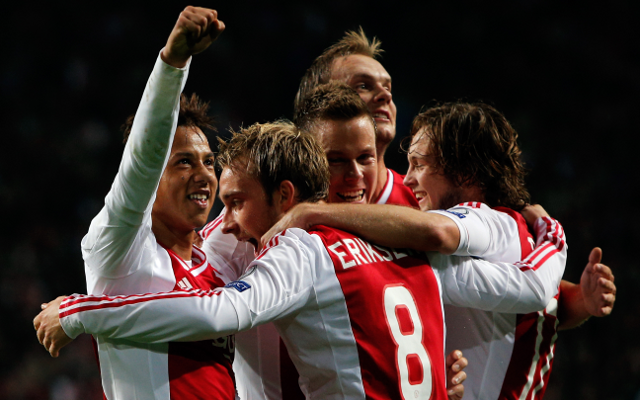 Danish star Christian Eriksen has sparked a race for his signature between Liverpool, Manchester City, Manchester United and Tottenham after rejecting a new deal at Ajax.

Eriksen is one of the hottest properties in Europe and has been targeted by the Premier League quartet as well as Bundesliga leaders Bayern Munich and La Liga champions-elect Barcelona.

Still only 20, Eriksen is a star of the Dutch Eredivisie but his contract is due to expire at the end of next season and his reluctance to agree new terms with Ajax is likely to result in his sale this summer with an asking price of upwards of £15million.

“Christian has informed us that he doesn’t want to sign a new contract right now,” Ajax technical director Marc Overmars told sporten.dk. “I think he and his agent want to see what opportunities present themselves this summer.

“We want him to stay here for at least two more years, but the day he leaves us, he will be ready to play for the very best. He’s a player even the biggest clubs in the world could do with having in their squad.”

Eriksen’s agent Martin Schoots added in the Daily Mail: “Anything Marc or Christian have said about it is correct. But we’ve agreed that we don’t want to talk about the speculation too much. Christian wants to focus solely on football and not so much on his future.”

Eriksen has already played 31 times for his country and is a regular in the Danish national side. He was a product of the famous Ajax academy having joined from an early age.

He has previously stated his intention to move to the Premier League during his career and that could happen as early as the summer given his fairs to agree terms with Ajax.