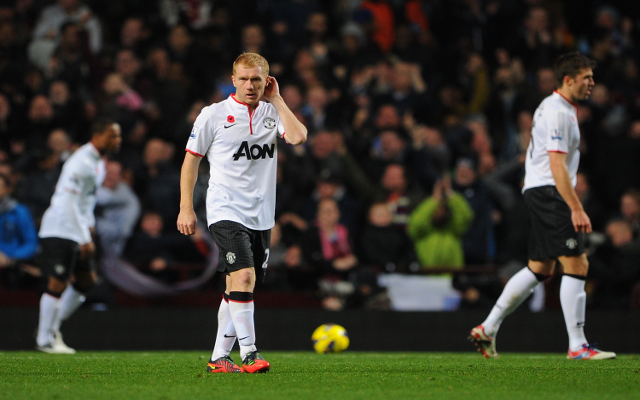 Midfielder stays behind at Old Trafford due to knee injury.

Paul Scholes will miss Manchester United’s Champions League last-16 clash with Real Madrid at the Bernabeu on Wednesday because of a knee injury.

Veteran midfielder Scholes has not played since the FA Cup win over Fulham two-and-a-half weeks ago after picking up a knee problem and, although he is back in training, he did not travel to the Spanish capital with the rest of Sir Alex Ferguson’s squad.

Scholes would have only made the bench at best, but will a lack of match fitness a problem Ferguson opted to leave the 38-year-old out of his 22-man squad in order to train at United’s Carrington training ground.

He will be the only absentee through injury with winger Ashley Young having overcome a knee injury of his own and defender Jonny Evans and utility man Phil Jones having shaken off niggles that forced them off during Sunday’s Premier League victory over Everton.

United are likely to use Jones in the same holding midfield role he occupied in the Everton and is likely to be given the role of man-marking former United favourite Cristiano Ronaldo, who is key to Real Madrid’s chances of victory.

Paul Scholes names the only two clubs that could ‘afford’ to sign Erling Haaland this summer as Man United and Chelsea target striker Apr 8 2021, 22:56
Tottenham FC