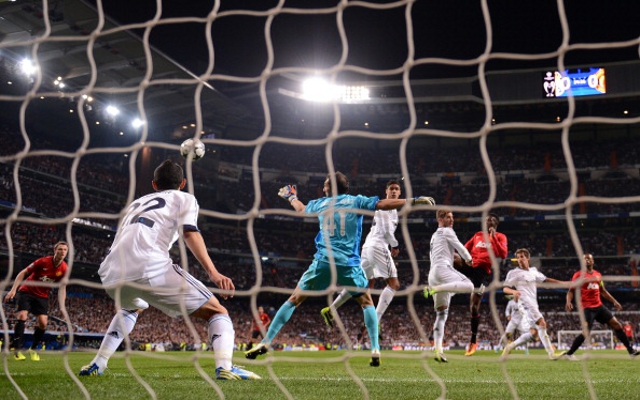 Manchester United return from their trip to the Bernabeu with a priceless away goal.

Danny Welbeck and Cristiano Ronaldo headed a first-half goal apiece as Real Madrid and Manchester United played out a 1-1 draw in the first leg of the last-16 of the Champions League on Wednesday.

Former United star Ronaldo levelled on 30 minutes with his seventh Champions League goal of the season, making him the top-scorer in the competition, after Welbeck had headed home a corner 10 minutes earlier.

Alex Ferguson had promised goals before the match and they came early enough, but then his team put on a battling performance with David De Gea excellent in goal to take a draw into the second leg at Old Trafford on March 5.

Before kick-off all the talk was about the exclusion of a centre-half on either side.

It was expected that Pepe, who has only managed 25 minutes since an ankle operation at the turn of the year, would not be risked in such a big game for Real.

However, the omission for the visitors of Nemanja Vidic was a surprise after the Serb failed to even make the bench after captaining his side in a 2-0 win over Everton on Sunday.

Sami Khedira had the first effort for the home team in the second minute on finding space in the area, but he pulled his shot well wide.

Next it was Angel Di Maria who tried his luck from outside the area before De Gea tipped a goal bound shot from Fabio Coentrao onto the post.

United weathered the early storm and when Welbeck and Shinji Kagawa combined well to win a corner on 20 minutes it was Welbeck who eluded the marking of Ramos to head home the opening goal and his first in the competition this season.

Ronaldo hammered wide the rebound of his own blocked free-kick before grabbing the equaliser 10 minutes later when he leapt above Patrice Evra to head home a Di Maria cross from the left.

Moments later Welbeck was inches from his second after good work on the left by Robin Van Persie and Wayne Rooney shot wide from the resultant corner.

Alonso then took a quick free-kick from his own half that put Mesut Ozil through and De Gea had to be quick to block the shot.

Ronaldo tested De Gea with a shot on the turn early in the second-half and Di Maria tried from further out before the Argentinian volleyed just wide.

While Madrid were enjoying a lot of the possession, United continued to look dangerous on the counter-attack while managing to restrict the home side to long shots.

A minute later De Gea made the save of the game stopping Coentrao from close range with his outstretched foot.

Then Van Persie had two chances within a minute to restore United’s lead with 20 minutes remaining.

The first shot was pushed onto the bar by Diego Lopez after Rooney had played him into space before he miskicked an easier chance.

United’s defensive play grew throughout the game, the experienced Rio Ferdinand organised well the centre of defence, while Michael Carrick aided by Phil Jones and a very deep Rooney tidied up a lot in the centre of the pitch.

When Madrid did get through in the final minutes it was again Madrid-born De Gea, signed from city rivals Atletico, who was at hand to save from Khedira on 80 minutes.

There was still time for Ronaldo to float a free-kick just over the bar and Diego Lopez to tip wide a Van Persie shot in injury time.