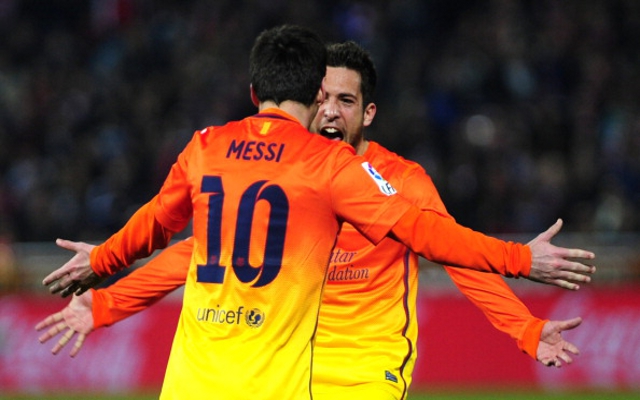 Lionel Messi racked up his 300th Barcelona goal before netting a winner to notch up his 301st in Barcelona’s comeback win against Granada.

Check in to FC Barcelona vs Sevilla

Lionel Messi scored his 300th Barcelona goal as the Spanish league leaders came from a goal down to beat Granada 2-1 at Nuevo Los Carmenes on Saturday.

Odion Ighalo had prodded the hosts into a shock first-lead with virtually their first attack of the game, but Messi’s moment arrived five minutes into the second period as he pounced after Tono had failed to hold Cesc Fabregas’ effort.

And soon after the Argentine had his 301st goal for the Catalans as he curled home a sumptuous free-kick to extend Barca’s lead at the top to 15 points over Atletico Madrid.

Barca assistant manager Jordi Roura had taken the opportunity to rest Andres Iniesta ahead their Champions League tie with AC Milan in midweek, whilst Xavi was again missing through injury.

But despite being without either of their two midfield metronomes Barca started brightly.

Messi was unsurprisingly to the fore and he slipped in Alexis Sanchez after just five minutes but the Chilean’s heavy touch allowed Tono in the Granada goal to collect.

Thiago then headed over and Messi nearly connected with Cesc Fabregas’ knockdown at the end of a wonderful move as Barce continued to dominate, but they were rocked when Granada took the lead on 26 minutes.

Carlos Aranda’s excellent cross to the back post was knocked back across goal by Guilherme Siqueira and Ighalo couldn’t miss when presented with an open goal five yards out.

Adriano fired just wide and Messi had a free-kick well held by Tono as the visitors instantly went in search of an equaliser, but they were forced into a change before half-time as Jordi Alba came on to replace the injured Adriano.

Aranda was then handed the chance to make it 2-0 before the break as Thiago gifted him the ball from a Barca free-kick but he hesitated before taking on the shot and Victor Valdes made an easy save.

And that was to prove a turning point as it took Barca just five minutes to level the scores after the interval.

Tono could only parry Fabregas’ fierce drive from 20 yards back into the middle of the goal where the grateful Messi was on hand to slot home his landmark goal.

Pedro then hit the post and had a goal rightly ruled out for offside as Granada struggled to contain the wave upon wave of attacks from the visitors and they were finally in front 17 minutes from time.

Messi’s free-kick had just enough power and dip to take it past Tono although the keeper will be disappointed after getting a hand to it.

Cristian Tello should then have sealed all three points as he blasted over from close range and the winger was nearly made to pay for his profligacy as Inigo Lopez and Yacine Brahimi wasted fine chances in the dying minutes to salvage a point for Granada.