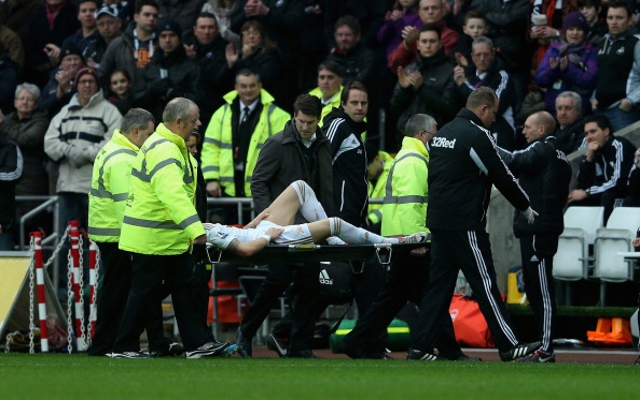 Chico Flores fails to make progress race to be fit for Capital One Cup final.

Swansea City defender Chico Flores is losing his race against time to be fit for the Capital One Cup final on Sunday after falling behind in his recovery schedule.

The Spanish centre-back suffered ankle ligament damage in Premier League action against Queens Park Rangers two weeks ago and was immediately ruled out of the Wembley final with League Two Bradford City.

But round the clock treatment had given him hope of making the Wembley showpiece, which will be Swansea’s first-ever domestic cup final appearance, but the Daily Express report that Flores has fallen behind and now looks an unlikely participant.

Summer signing Flores has been a revelation in the Premier League but his place alongside Ashley Williams at the heart of Swansea’s defence is now likely to go to youngster Kyle Bartley, who is winning the battle ahead of club captain Garry Monk.

Swansea manager Michael Laudrup has been given a fitness boost, however, ahead of the Capital One Cup final with the new that South Korean midfielder Ki Sung-Yueng should be fit enough to take part.

Ki has been a regular in Laudrup’s side since signing from Celtic at the start of the season and has overcome a throat infection which had threatened to deny him his place at Wembley.