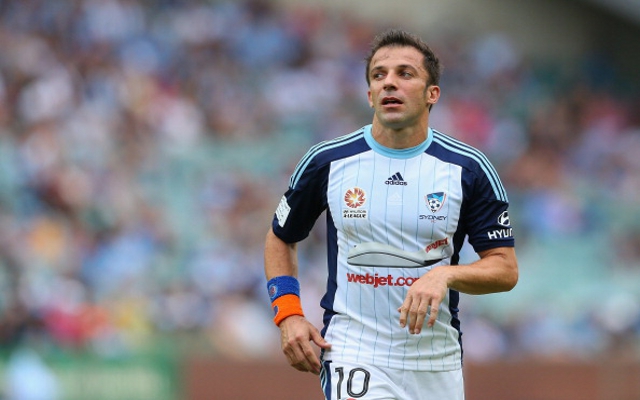 Check in to Melbourne Heart vs Sydney FC

Italian veteran Alessandro Del Piero Thursday signed on for a second season in Australia’s A-League as his Sydney FC side push for a play-off place.

“I’m very happy about this news,” the Juventus and Italy legend told a press conference after agreeing to activate the second year of a reported US$2 million-a-season contract.

“For sure it’s a great moment for me, for Sydney FC,” he said, thanking the club for trusting him.

The 38-year-old Juventus legend said he would not carry on if he could not play at a high level.

“In my age, I want to be very honest. We have to see year by year.”

Del Piero has already scored 11 goals in 18 matches, a record haul by a Sydney FC player in a single season and been a hit off the pitch too, helping to boost crowds, shirt sales and television ratings.

Sydney FC has fought back from the bottom of the league to fifth place — within reach of qualification for the playoffs, largely thanks to Del Piero’s goals.

“We have a good position but it’s not enough, we have six games remaining but we have to push our energy to take a play-off,” he said.

“We want to improve for the next year and do better and better every week,” he added.

The team’s charge for the finals gathered steam, with a 2-1 win over Adelaide United following the signing of Socceroos captain Lucas Neill on Saturday.

An early-season collapse was halted by the December arrival of former Australia coach Frank Farina, quickly turning Sydney FC into the form team.