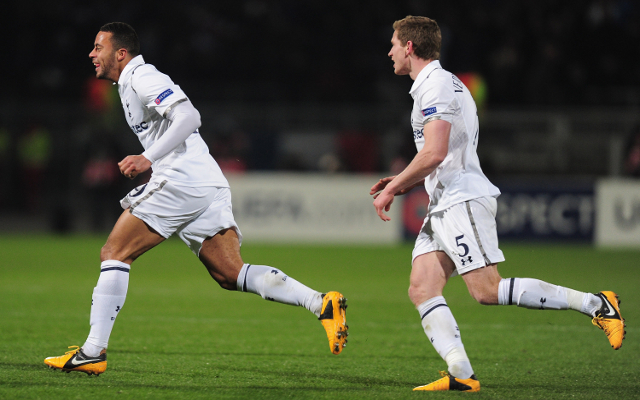 A last-gasp goal from Mousa Dembele booked English Premier League side Tottenham a place in the last 16 of the Europa League on Thursday as he rescued a 3-2 aggregate win over French hosts Lyon.

Spurs, who now face Inter Milan, had won the opening encounter 2-1 but trailed for much of the match to a 17th-minute goal from Maxime Gonalons before a cracking drive from Dembele rescued the Londoners and saved them from an exit on away goals.

Joining Spurs in the next round were fellow English travellers Newcastle, who thanked Shola Ameobi’s third European goal of the season from the penalty spot for a 1-0 win at Metalist Kharkiv, the Ukrainians who held the Magpies to a goalless stalemate on Tyneside last week.

Newcastle were under the cosh for much of the match and Dutch keeper Tim Krul made several top drawer saves, before Ameobi struck on 64 minutes for a crucial away goal after keeper Olexandr Goryainov upended Moussa Sissoko.

And despite late pressure from the Ukrainians — Brazilian striker Willian Gomes hitting the post — Newcastle, whose last trophy came in the old Fairs Cup, predecessor of the now defunct UEFA Cup, back in 1969, held on to advance as Kharkiv suffered only their second defeat in 12 outings at the Metalist Stadium.

Both Spurs, UEFA Cup winners in 1972 and 1984, and Newcastle had to make do with runners-up finishes in the opening group stage with both sides fielding at times less than full strength line-ups to cope with the dual challenge of Europe and the Premier League.

But Thursday saw both them and Newcastle eliminate sides who had won their respective groups.

Marseille’s English midfielder Joey Barton, who is set to go up against David Beckham in Ligue 1 this weekend when the former England skipper makes his debut for Paris Saint Germain, lamented Lyon’s exit.

But he took to Twitter to note that Newcastle are the next best thing for French fans with their clutch of recent French signings.

“Lyon are out but on the plus side one of the French sides are through, ‘Le Toon’,” Barton tweeted.

Spoiling matters for Tottenham was the fact that seven people had Wednesday night sustained minor injuries when visiting fans were attacked by a group of 50 masked men who burst into a Lyon bar throwing chairs and stones, local officials said.