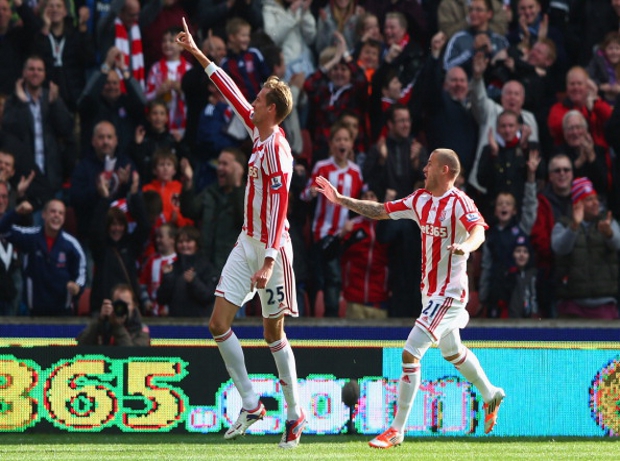 Striker happy to stay at the Britannia Stadium.

Peter Crouch has pledged his future to Stoke City and will fight for his place in manager Tony Pulis’ team at the Britannia Stadium.

Crouch was the subject of interest from Premier League strugglers Queens Park Rangers during the January transfer window as manager Harry Redknapp attempted to do a deal to sign a player he had previously worked with at Tottenham, Southampton and Portsmouth.

The deal did not materialise with QPR opting to put their faith in French international striker Loic Remy, and Crouch has continued his career at Stoke City as he fights for a place at the head of the attack with team-mate Kenwyne Jones.

And Crouch, who joined Stoke from Tottenham at the start of last season, is content with life in the Potteries and happy to complete the season.

Crouch told Sky Sports News: “Everyone knows that I have got a good relationship with him (Redknapp). I think he is a fantastic manager and QPR are a club that are very close to my heart. That is where I grew up really and where my family are, but it didn’t materialise and I am very happy to be at Stoke.”

Crouch could yet leave in the summer, however, with Redknapp likely to be back with another offer should he manage the unthinkable and keep QPR in the Premier League. He would also be the subject of interest from West Ham, who will be on the lookout for a new targetman when Andy Carroll’s loan spell ends.

‘One of the highlights’ – Peter Crouch names the Man United player he’s most excited about July 10, 2020 21:01
Manchester United FC

‘He can light the Premier League up’ – Pundit predicts incoming Chelsea signing to be success April 21, 2020 21:49
Chelsea FC