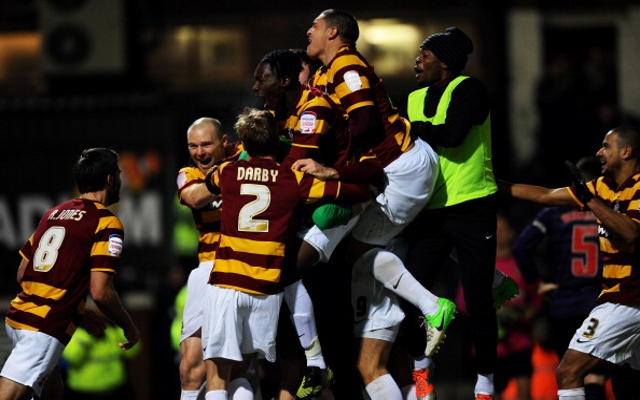 League Two club against playing in Europe due to the cost.

League Two side Bradford City are likely to turn down the chance to play in Europe next season if they achieve the unthinkable and defeat Swansea City in the Capital One Cup final at Wembley.

The winner of the season’s first final will earn a place in the Europe League next season, but Bradford City chairman Mark Lawn has hinted that they would turn down the opportunity due to the costs incurred.

Budgets are tight at the Valley Parade club, who have been in administration on two separate occasions previously, and Lawn would not put the future of Bradford City on the line simply to enjoy the taste of European football.

“I’m not going to pay to play in Europe,” Lawn told The Sun in the build-up to the Wembley showdown, which was booked after wins over Premier League Arsenal and Aston Villa.

“When we beat (Aston) Villa, I was told, ‘You don’t really want to get into Europe — it costs you money in the early rounds’. I said, ‘Well, that’ll be fun because if it costs us money, we won’t be there’. Realistically, it’s not going to be a problem because I don’t think we’re going to win against Swansea.

“I won’t put us in fiscal danger to play in Europe. That’s not going to happen. I’m deadly serious. It’s all very well saying there are financial rewards once you get to the group stage. But we’re a fourth division club — realistically, we’re not going to get there.”

If Bradford City overcome Premier League Swansea City at Wembley and subsequently turn down the European qualification, the place will automatically go back to the Premier League meaning the team finishing eighth could earned a Europe League spot.

Welsh side Swansea City, meanwhile, will have to play under the English flag if they are victorious in their first-ever domestic cup final appearance following a verdict by UEFA.