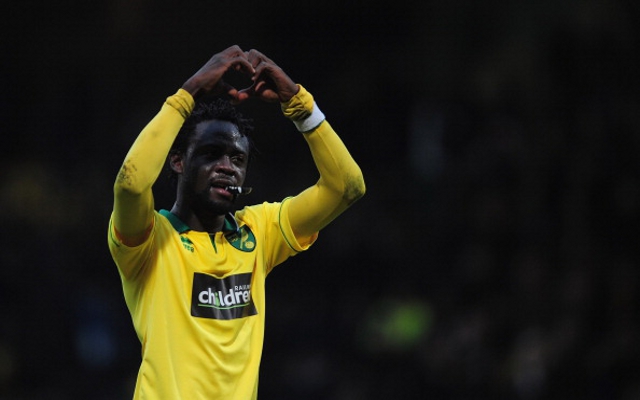 Norwich City battled back from a goal down to defeat Everton at Carrow Road.

Grant Holt scored in the fourth minute of injury time as Norwich City came from behind to beat Everton 2-1 at Carrow Road and secure a first win in their last 10 Premier League games.

The Canaries had trailed to a first-half Leon Osman header before substitute Kei Kamara levelled with six minutes remaining, and the hosts were rewarded for their late pressure when burly striker Holt found the net.

For Chris Hughton’s side, the win was their first since beating Wigan 2-1 in mid-December, and the edge given to them by the second-half introduction of Sierra Leone striker Kamara will come as a major boost to a side that has desperately struggled to score goals recently.

In contrast, the result is another blow to Everton’s chances of Champions League qualification, with David Moyes’ side now on a run of just one win in their last six league games.

They remain in the top six, but the defeat will only increase the concern for Toffees’ fans at a time when the future of manager Moyes — whose contract is due to expire in the summer — is the subject of speculation.

Norwich played with determination in the first half, but were punished for their lack of a cutting edge as the visitors got their noses in front in the 39th minute.

Leighton Baines’ delivery from the left wing is a constant source of danger for opposition teams, and so it proved as he swung in a typically pinpoint cross that Osman, all alone inside the penalty area, could not fail to convert.

It was his sixth goal of the campaign, and had set Everton on their way to a precious three points until Norwich were brought to life when Kamara, a January signing from Sporting Kansas City, entered the fray just before the hour.

Moments later, he forced a save from Tim Howard, the Everton goalkeeper who was making his 300th appearance for the club, with an acrobatic effort from inside the area.

The tone had been set for what was to come, and the 28-year-old prodded just wide again in the 68th minute.

However, he was not to be denied with six minutes remaining when he rose high above Marouane Fellaini to meet a left-wing corner with a thumping header and restore parity.

The home side, who had scored just one goal in their previous six games in all competitions, now had the wind in their sails, and they got their winner right at the very end.

Holt missed the target as the game moved into three minutes of injury time, and that allotted time added on had already passed when he pounced again, this time stabbing home from close range after another left-wing cross had created havoc in the Everton area.