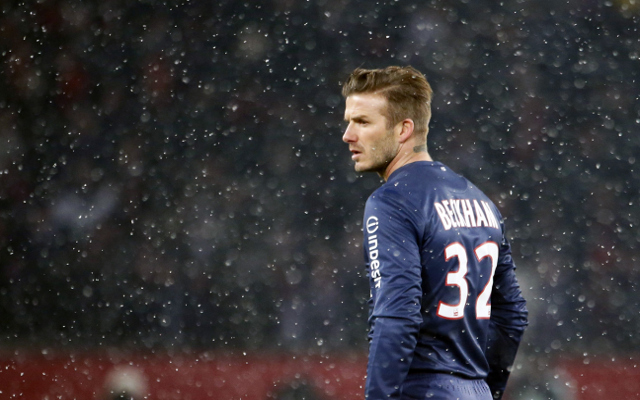 PSG overcame Marseille with the help of a certain David Beckham.

Check in to Reims vs PSG

David Beckham made an immediate impression on his Paris Saint-Germain debut in the Ligue 1 leaders’ clash against arch-rivals Marseille on Sunday with a cheeky piece of skill creating the second goal in a 2-0 win.

The former England captain was named among the substitutes for “Le Classique” before eventually entering the fray 15 minutes from time as he featured in Carlo Ancelotti’s plans for the first time since his feted arrival at the end of January.

Beckham was fourth off the PSG team bus as it arrived at the 48,000-capacity Parc des Princes in the south-west of the city on Sunday evening with cameras focussed on his every step in the French capital.

The midfielder, sporting a wide grin, then emerged from the home changing room for the pre-match warm-up displaying typical British grit as one of just a handful of players without a hat or jogging trousers despite the freezing, snowy conditions.

While Marseille players were jeered vociferously as they went through their paces prior to kick-off, Beckham’s every move on the pitch was captured with French broadcaster Canal+ revealing that one camera — dubbed “Beck-Cam” — would be set aside solely to follow the ex-Manchester United star.

The 37-year-old was then officially presented to the home fans minutes prior to the start of the match before returning down the tunnel as wife Victoria, wrapped up warmly to combat the cold, watched on from the stands.

The hosts took the lead on 11 minutes as Lucas Moura’s effort was turned into his own net by unwitting Marseille defender Nicolas N’Koulou for an own goal.

The opener was greeted with delight from Beckham, sat next to Jeremy Menez on the bench, with former England striker-turned-TV presenter Gary Lineker tweeting: “Superb fist pump from Beckham for PSG’s opening goal”.

The midfielder acknowledged the warm reception afforded to him with an appreciative wave to the crowd as he began to warm up along the touchline five minutes after half-time.

Asked by a touchline reporter just past the hour mark as to why PSG appeared to be labouring following the break, Beckham responded: “It’s football. There are always difficult moments.”

Beckham was finally summoned from the bench to replace Javier Pastore in the 76th minute, becoming the 400th player to wear PSG colours as he strode onto the pitch.

His first involvement in French football was to spray a pass, delivered with trademark precision, to Ezequiel Lavezzi out on the wing only for the Argentine to miscontrol and concede possession.

But the midfielder then played a key role in PSG’s second goal, exchanging passes with fellow substitute Menez before the French international sent in a low cross that was directed beyond visiting goalkeeper Steve Mandanda via Ibrahimovic’s knee.

France’s L’Equipe newspaper headlined the game Sunday on their front page, but elected to downplay the Beckham angle, focusing instead on the significance of the game in terms of the Ligue 1 leadership battle.

Beckham was not the only English representative in Paris on Sunday, with Marseille’s on-loan midfielder Joey Barton also experiencing his first taste of the PSG-OM rivalry.

Reputable magazine France Football had been quick to highlight the duel, contrasting the public perception of both players by adorning Beckham, the “angel”, with wings and a halo and depicting Barton as the “devil” with a mocked-up red-faced, horned image on the front page of its weekend edition.

A product of the Manchester United youth academy where he starred at Old Trafford for the best part of a decade before moving on to Real Madrid, Los Angeles and AC Milan, Beckham is more than accustomed to intense rivalries.

Beckham, who did his Paris cause no harm by agreeing to donate his estimated 800,000-euro ($1 million) monthly salary to a children’s charity, admitted he was relishing the prospect of his latest adventure.

“The league is full of talented players and teams, and it is pretty close at the top just now. It’s a difficult league. I know it will be a challenge but it is one I’m really looking forward to.”