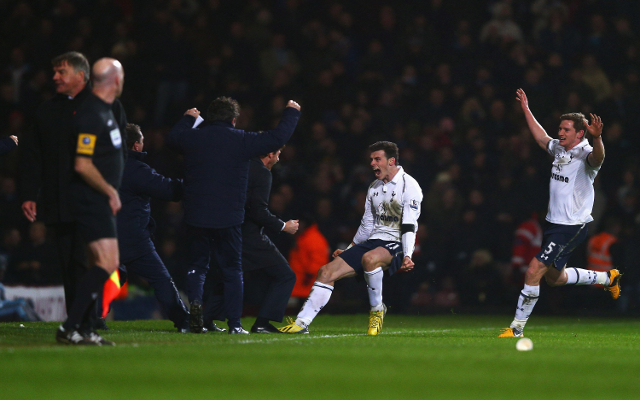 Gareth Bale scored a stunning winner at the death to take Tottenham up to third.

Gareth Bale fired Tottenham into third place in the Premier League as his sublime last minute goal capped a majestic performance in a 3-2 win over West Ham at Upton Park on Monday.

Bale has been in the form of his life in recent weeks and the Wales winger added another chapter to his growing legend with a brilliant brace that would surely have been appreciated by Hammers legend Bobby Moore, whose death 20 years ago was marked by a moving pre-match tribute.

Moore, regarded as one of the best defenders in the history of the game, famously captained England to World Cup glory in 1966 and also led West Ham to FA Cup and Cup Winners’ Cup triumphs.

But even Moore might have been hard pressed to subdue Bale in this mood.

Bale had given Spurs a first half lead but an Andy Carroll penalty and Joe Cole’s strike put West Ham ahead by the hour mark.

Gylfi Sigurdsson came off the bench to equalise and Bale produced a simply remarkable long-range winner to move Tottenham, unbeaten in their last 11 league games, two points clear of Chelsea and four ahead of fifth placed Arsenal, who visit White Hart Lane on Sunday.

Moore’s grandchildren led the teams out and placed the ball on the spot for kick-off, which followed an emotional minutes’ applause.

Fuelled by the sense of occasion, West Ham started brightly and Matt Jarvis cut into the penalty area after a flowing move and fired in a low strike that Hugo Lloris saved well.

Just as West Ham appeared to seizing control of the match, Bale underlined his claims as the best player in the Premier League with yet another moment of magic to put Spurs ahead in the 13th minute.

Bale was surrounded by West Ham defenders on the edge of the penalty area, but, drifting away from James Collins, he cleverly worked space for a shot and as West Ham’s back-four hesitated the Welsh winger drove a low strike past Jussi Jaaskelainen.

That was Bale’s 22nd goal for club and country this season, as well as his eighth in his last seven games.

But West Ham responded well to that setback and grabbed an equaliser in the 25th minute.

Kevin Nolan laid the ball off to Carroll in a dangerous position in the penalty area and former West Ham midfielder Scott Parker, lunging in to block, made clear contact on Carroll, forcing referee Howard Webb to give the spot-kick.

England forward Carroll, on loan from Liverpool, stepped up to smash the penalty past Lloris for his third goal of the season.

Jan Vertonghen almost restored Tottenham’s lead in the opening moments of the second half when his cross deflected off Guy Demel and forced Jaaskelainen into a scrambling save.

Jaaskelainen, called into action again from the resulting corner to push away Steven Caulker’s towering header, was keeping Spurs at bay almost single-handed.

He turned Sigurdsson’s long-range shot onto a post and when the rebound fell to Emmanuel Adebayor, the Hammers goalkeeper leapt to his feet to block the Togo striker’s follow-up.

After those escapes, West Ham moved ahead in the 58th minute when Cole collected Joey O’Brien’s lofted pass with a fine first touch and turned to bury his shot beyond Lloris.

Tottenham kept pressing and, after Matt Taylor missed a golden chance to extend West Ham’s lead, the visitors levelled when Sigurdsson prodded home at the far post from Bale’s free-kick.

That set the stage for a pulsating finish and after more heroics from Jaaskelainen, Bale took charge, producing a truely stunning strike from 30 yards to seal the points.