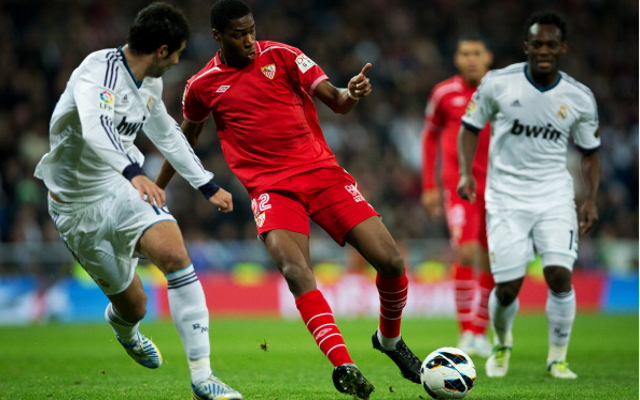 Etihad Stadium side look to bring in Spanish based duo.

Man City are ready to make an offer for Sevilla pair Jesus Navas and Geoffrey Kondogbia according to the Daily Express.

Roberto Mancini will look to conduct a major re-shuffle of his Etihad Stadium squad and is looking to bring in the La Liga pair with an offer of £17.6m which they feel will suffice given Sevilla’s well publicized financial problems.

One club man Jesus Navas is something of a cult hero at the Ramón Sánchez Pizjuán, with the Spanish international being something of a homebody who has doggedly refused offers to leave the hometown club he has represented since the age of 15.

Navas has racked up 380 appearances for the Andalusian side but could finally leave Sevilla if the club deemed it financially pertinent to do so.

Adaptable French youngster Kondogbia only moved to Sevilla last year and has impressed this term. The 20 year old is usually used in a midfield role but can also play as a centre or left-back.

In order to make room for summer additions Mancini has been ordered to balance the books with player sales and the Italian is ready to listen to offers for first team stars Edin Dzeko, Joleon Lescott and Kolo Toure, among others.