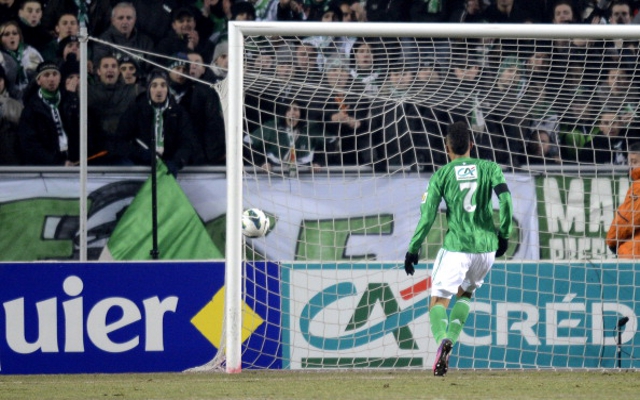 Saint-Etienne booked their spot in the last eight of the Coupe de France.

Saint-Etienne remain in contention to win both domestic Cups after beating Lille 3-2 on Tuesday to reach the quarter-finals of the French Cup.

Les Verts, who beat Lille on penalties in the semi-final of the League Cup last month, repeated the trick against the northern outfit at the Stade Geoffroy-Guichard, although they had to come from behind to do so.

Marko Basa headed in a free-kick from in-form Dimitri Payet to give Lille the lead, but a farcical Aurelien Chedjou own-goal, when a kick-out from goalkeeper Steeve Elana ricocheted off him into the net, restored parity.

A deflected effort from Pierre-Emerick Aubameyang put Saint-Etienne in front, and Renaud Cohade set up Brandao for a cool finish for the hosts’ third goal, before Salomon Kalou pulled one back after a Payet shot had been pushed out by ‘keeper Stephane Ruffier.

Saint-Etienne have won the French Cup six times, but have not won a major trophy of any sort since 1981.

Man United 3-0 Saint-Etienne player ratings: Ibrahimovic gets a perfect 10 as his hat-trick fires his side to victory Feb 16 2017, 22:57
Manchester United FC

Pogba’s brother Florentin admits he wants transfer to England May 23 2015, 19:03
AS Saint-Etienne

Monaco coach and Argentine legend snubbed in Ligue 1 Manager of the Year shortlist May 5 2015, 11:44
AS Saint-Etienne