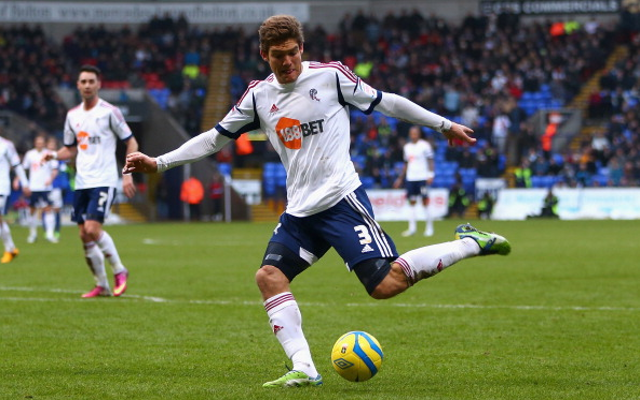 Spanish full-back wanted at the Britannia Stadium in the summer.

Check in to Stoke City vs West Ham United

Stoke City are preparing a summer move for Bolton full-back Marcos Alonso after manager Tony Pulis made a personal check on the Spaniard.

Alonso was a transfer target for the Britannia Stadium club in the January transfer window, but a deal was never struck between the two clubs and the 22-year-old continued his career in the Championship.

But the Daily Mirror report that Pulis and Stoke City’s director of football Mark Cartwright watched Alonso in action in midweek and will now make another attempt to sign the Spanish star at the end of the season.

Stoke City boss Pulis is keen to bring in a natural left-sided full-back with the more naturally right-sided Andy Wilkinson having played a lot of football in the unfamiliar role this season. But Stoke City will face competition from Serie A side Fiorentina to sign Alonso.

Alonso has been with Bolton since 2010 having joined the club for an undisclosed fee from Real Madrid, where he came through the youth system, into the B team and made one appearance for the first team.

The Spanish under-19 international had to make do with bit part roles in his first two seasons at the Reebok Stadium but has become a regular under new manager Dougie Freedman.